A couple of months before we were due to leave for Melbourne, Hubs asked if he could buy an electric skateboard. Yes, you read correctly. Now being married to a nerd who loves all things gadgety, I wasn’t terribly surprised with the request. He showed me some YouTube clips to convince me of how teyodally awesome they were. He even suggested we get one each!! This is where I suggested he hold his horses.

I’m not against all things fun, in fact, I don’t mind a bit of mischievious behaviour every now and then, but I really couldn’t imagine myself on one of these things. I mean, the ones he was showing me weighed between 25 and 30kg!! I suggested that it was perhaps something we could look into getting once we got down to Melbourne, and a sad look fell upon his face. So I asked him:

So “to ebay to ebay!” to buy an electric skateboard! And I gotta say, it rocks just a little bit. Okay, a lot! Hubs’ friends thought it was really cool and had lots of turns on it before we left. I was worried Hubs wouldn’t get much use out of it down here, but he rides it to uni most days (cos, you know, we live about 800m from his lecture rooms!) and takes it on bigger trips as well. And yes, I’ve had a turn and it’s a lot of fun! The first time I rode it, I had on a helmet, wrist guards and knee pads and looked ridiculous! But, you know, safety first.

It turned out to be a great investment, not only in transportation, but in Hubs’ happiness. And you know me! Anything to make Hubs happy! 🙂

Hubs and his beloved skateboard. You can see the wireless trigger remote in his right hand. 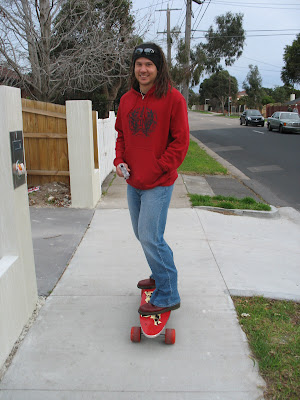