A day in Washington DC
Today we both had our grumpy pants on 🙁 which was a combination of the heat (about 35 degrees), the humidity (felt like 90%) and the fact that we didn’t get much sleep because 2 Swedish chicks in our room left at 2am and didn’t attempt to keep the noise down, and we had to get up at 7am to get the car back to the rental place by 8am. We headed out around 7:30am and dropped the car off with no fuss and picked up a map from the info centre. The plan for today was to hit the museums and monuments and White House.

I had been very organised and had packed us sandwiches and 4 bottles of icy-cold water for our big day. We headed to Capitol Hill first and to get inside, we were told we had to throw all of our food and drink in the bin. I don’t think so. I suggested to Hubs that we might come back tomorrow when I was “less prepared”. (That made me even grumpier actually!) So we just started walking down the “mall” and we did some celebrity spotting! 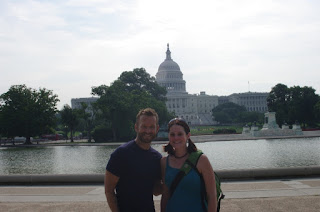 For those of you who have been living under a rock, this is  Bob Harper of The Biggest Loser fame. Even though I’ve only ever watched 1 of the Australian series’, I could still spot him! Billy-Bob’s Mum, I know you would have killed me if I didn’t get a photo with him! Jealous are we?? 🙂
We continued along and found some pretty fountains so Hubs took a few more shots. 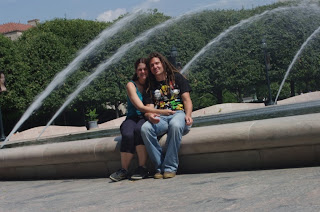 And then we waited for the Natural History Museum to open. 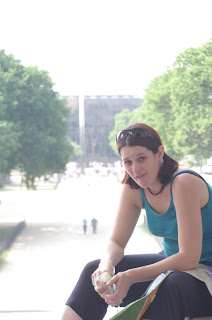 Seriously. It was so stinking hot. It was a relief to go inside into the air con! We saw the Hope Diamond which was pretty outstanding and had a look around the gemstones and rocks exhibit (Dad would have been proud!!) It was very crowded with school kids so we decided to continue on. We headed towards the Washington Monument 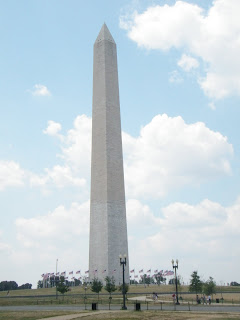 and then went for a look at the White House. There were probably about 50 people standing around the front, and it seemed like something was happening as there were police barricades up and police officers directing traffic. And then a whole lot of people came out from the White House onto the front lawn. And then we heard the choppers…

It was so cool! And so damn LOUD!! And there were 3 OF THEM!! The other 2 were decoys or bodyguards or something. 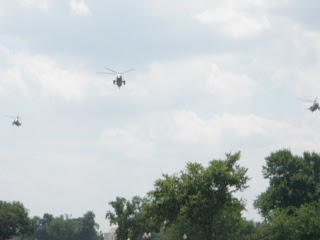 The middle chopper, that is, the one carrying The President (allegedly) landed in front of the White House. We think we saw his foot! 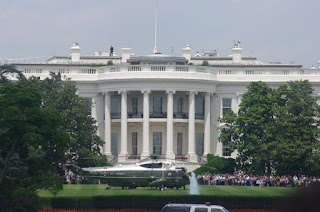 See the security on the roof? And the other 2 choppers just sat in the air, watching on. There was a bit of hoo-ha and cheering from the front lawn (see all the people gathered?), then not long after (maybe 20 minutes?), the chopper took off again! 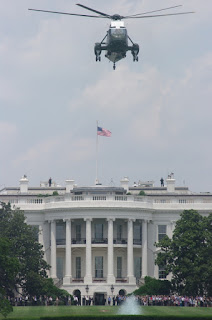 It really was quite a crazy and awesome coincidence and we were able to see the Capitol in it’s most elitist state. After the excitement we decided to head down to the reflecting pool and Lincoln Memorial. 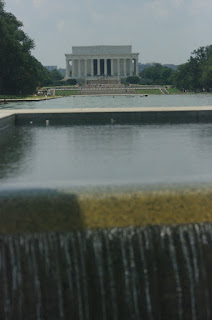 And we also thought it would be a good time for a little nap. 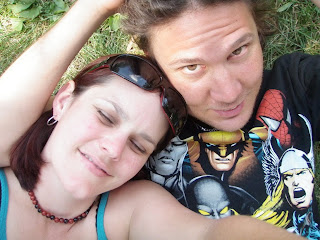 We’d pretty much had enough by this stage so we headed back in to town for some air conditioning and beer. We went to one place for a beer but left cos it was rubbish, then we settled on an Irish pub which was pretty cool. Food was okay and drinks were nice, but really, it wasn’t that cheap. ($50ish USD for 2 burgers and 3 pints. Ouch!)  We then headed back to the Hostel for some air con, chats and cocktails (i.e. the rest of the vodka with lemonade!) and a good night sleep in preparation for another day of sight-seeing.