Aaaaaaah. Our last day in New York and boy was it a beautiful day. Still slightly hazey, but the sun was poking through the clouds every so often which was enough to get us excited. We were super-keen to get our caricature done, so we left all our packed-up stuff at the hostel and headed back to Central Park one last time. There really weren’t many people around, but we found a couple of guys who accosted us. We had seen them being done for $15 for 2 people in Times Square so that was our budget. We had our $15 for the picture, $12 for our shuttle to the airport and $5 for a snack later on.

One of the guys started harassing us and we asked how much and he said $60 and we were like “noooooo no no no no. That’s too much for our budget” and we started walking away and he said “well you tell me how much” so Hubs said “fifteen dollars” and he said “okay okay okay, morning special” (he was Chinese) and we were like “well we want a pencil drawing, not charcoal so we can roll it up” “yes yes no problem” and he took out a pencil and showed us. So we agreed.

He sat us down and got to work. He drew me first, then Hubs. It probably took about half an hour (maybe more?) and when he finished, he showed us. 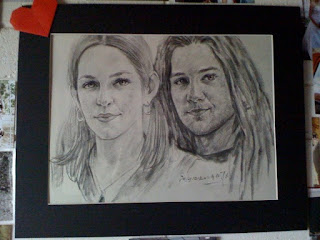 We were really impressed! He finished it and signed it and then told us we needed to buy a cardboard and plastic frame for $15 so it wouldn’t smudge.

This is where it went bad.

We were like “no, that’s why we wanted pencil” and he acted all innocent, rubbing it a bit, showing us that it would come off if we didn’t buy the frame. We kept saying no and he said “$10” and we said no again and then he said “okay okay $5 for frame.” In the meantime, he had already sticky-taped it inside the frame so we didn’t have a lot of choice. So I handed over $20. $15 for the picture and $5 for the frame. He just looked at me.

This is where it got worse.

Hubs and Wifey just stared at him, and at each other in disbelief. This was not going to go well. We tried to reason with him that we said fifteen dollars, not fifty, and that’s why we were so surprised when he agreed to it. He started to get really agitated and was talking to the other portrait guy, telling him we were trying to rip him off and we were trying to explain that we HAD NO MONEY. Etc etc etc. It kind of fell on deaf ears. We really didn’t know what to do and we felt ill over it. It was just a MASSIVE miscommunication. We offered him another $10 and after a LOT of bitching, he came around.

It was really awful. We couldn’t work out who got ripped-off, but we figure we came out of the deal okay. We were a little stunned by the ordeal, but had to make the most of our last couple of hours, so we set out for the reservoir and took some fun photos on the way.

Our reflections and shadows in one of the ponds. 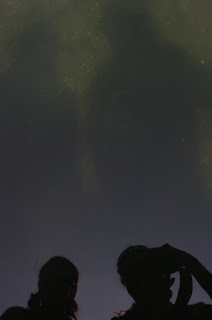 Us looking at our GPS location in Central Park. Nerdy nerdy nerdy!! 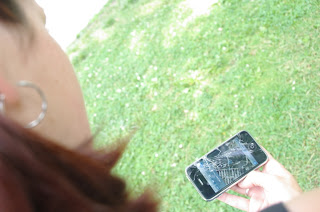 Wifey at the reservoir. It’s really quite overwhelming! 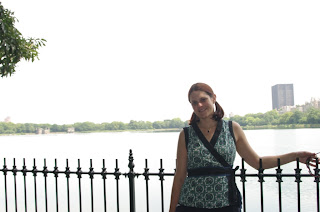 Hubs and Wifey and Central Park. 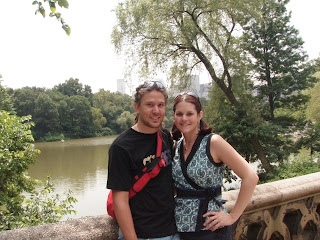 You could spend a week exploring Central Park – going to the zoo, playing a game of golf, paddling on the lake, going on a horse and carriage or pedicab ride, playing baseball, rollerblading, walking or cycling the various paths, swimming in summer and ice skating in winter, going to the public theatre, rock climbing, having a coffee or meal, getting ripped-off by artists…. the list goes on. It’s a truly beautiful place and I’d LOVE to go back some time.
We needed to catch a shuttle out to JFK airport for our 3pm flight to San Diego so we jumped on the subway, caught a connecting subway, then got the New York equivalent to the “air train” for the last leg out to the airport. It was quite cheap – $12 for the both of us – and really a piece of cake. Actually checkin in at the airport, well, that wasn’t so straight forward.
Long story short – we lined up in the wrong line at first, then asked someone and they told us where to go. It was a self-check in and bag drop for American Airlines and there was NO order to it. There were no lines, just bunches of people standing around ticket machines. I checked myself in and it said I needed to pay extra for the bag and I was like “no way I checked when I booked them” and I called someone over and they said something along the lines of  “since you’re travelling international in the next few days, it should be all right.” Not really filling me with confidence lady. My boarding pass was printed, and now it was Hubs’ turn. Pretty much the same thing happened with his bags, but at the end, no boarding pass. Instead, just a piece of paper saying “present this voucher at the counter at the departure date. American flights are always overbooked, and this was NOT a good sign.
Then there were only 2 people checking the bags in for about, oh I don’t know… 50 people? Oh, and then one of them clocked off for her break, so a supervisor turned up, got annoyed, and opened a counter herself. There was no line so I think we pushed in (I didn’t care – it was getting close to our departure time) and, again, she was like “yeah, your bags should be fine.” So Hubs kissed his goodbye, not expecting to see it at the other end.
We got to the gate (through security where Hubs had to take his shoes off – not a happy Hubs) and thankfully we were issued with a boarding pass for Hubs, but we had to swap places with someone once we were on board so we could sit together. No probs in the end. I just couldn’t believe how disorganised the whole process was!! For such a huge, famous airport, it was terrible!
We arrive 45 min early, but thankfully Hubs’ Dad’s cousin Charlene was on the ball and had found out we’d be early so she was outside waiting for us. A very smooth transition, and the start of a brilliant couple of nights with Charlene.
Charlene’s daughter Therese, Hubs, Charlene, Wifey, Therese’s hubs Larry. 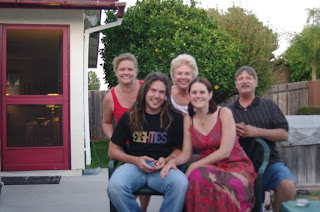 We felt at home instantly and staying with family ended up being one of the highlights of our trip for sure.