I remember feeling this way when I was travelling around the UK and Europe. I was constantly meeting people, only to have to say goodbye indefinitely. That’s how I felt about America. I loved it SO MUCH and I really would have loved another month over there (or 2 or 3) but I know we’ll get back there some day.

Anyway, back to our last day! The adventures aren’t finished yet!

Charlene took us down to the “drug store” as we had decided to buy our duty free booze there. We got a 1.75L bottle of Bombay Sapphire Gin for $30USD!!! BARGAIN!!! And we got 750ml bottles of Bacardi, Lemon Smirnoff and Raspberry Smirnoff for $10USD each. Crazy! We headed back for some brekky and a final pack to fit in the booze, and a final weigh-in. 1 bag was 50lb (22.6kg) and the other was 60lb (27.2kg) so we were luckily under the 30kg each weight limit.

Charlene was keen to show us around a bit in the morning and we were lucky enough to be able to push our train trip back to 3pm instead of 1pm. This was great as it meant we didn’t have to wait around at the other end (LA) and amuse ourselve. Charlene took us to the Cabrillo National Monument lookout and there was a beautiful view of the bay, the ocean, and the city.

Charlene and Wifey enjoying the view. (I forgot to bring in a photo of the city view, OKAY?) 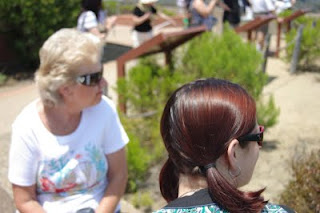 There is a US Navy port as well as a Marine Corps in San Diego, so it is a very military city. And we were in for a real treat, seeing: 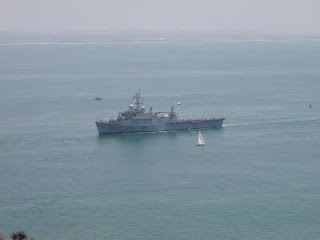 …a submarine (I’d never seen one in action before!) 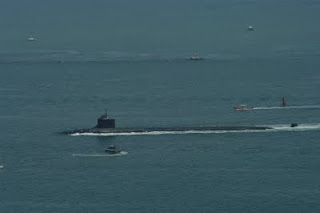 …AND a fighter jet! (or whatever it is!) 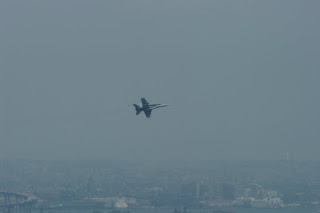 The trifecta! It was really cool! Hubs and I really like San Diego – we reckon out of all the places we visited, that would be the city we could happily live in.
And then it was time to say goodbye to Charlene. Thanks so much for showing us such a great time! We look forward to visiting again one day.
We jumped on the train and it was the start of our journey home. And what a beautiful start it was! It was the most stunning, scenic train trip I’ve ever taken – right on the shoreline! 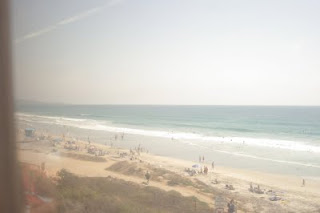 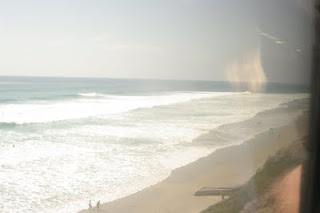 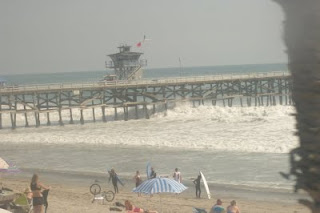 I kept interrupting Hubs saying “ooooh look at thaaaaaat!” until he finally put his comic book down and just relaxed and enjoyed the view with me. It really was an amazing end to what was a brilliant trip and I would recommend the train to anyone!
We arrived at Union Station in LA and waited for our shuttle to the airport which was late but I’d booked a super early one so it was no big deal. We got our last look at LA and that was fine by us. Got to LAX and if I haven’t already said it, V AUSTRALIA ROCKS!! They checked us in (we were about 4 hours early) and it was smoooooooth sailing! Oh, but then we had to go through dumb security again but we were on the home stretch so it didn’t phase Hubs so much this time.
The flight left on time (11pm) and since it was an overnight flight, I actually slept for about half of it. We skipped Saturday cos, you know, Saturday the 25th of July is like SO overrated, and arrived in Brisbane 5am Sunday morning. Ma picked us up and we waited for the family to arrived! Had a lovely morning tea (as usual) and told some stories, before getting on our 1pm flight back home.
I seem to have run out of days! I wonder what tomorrow will bring…. 🙂