Is it just me, or do mothers-to-be get asked more loaded questions than the general public? Here is an example of a question that I don’t mind being asked:

“Are you riding your bike to work, Wifey?”

Here is an example of the “question” that I have been asked about 30 times since moving to Wangaratta and, shock horror, have been riding my bike to work:

“Your not riding your bike to work are you Wifey?”

“Well yes, is a matter of fact, I am. Wanna make something of it?”

Shouldn’t I be being commended for wanting to keep active and fit during my pregnancy instead of being told I should be driving the 1.8km to and from work every day?

Now, granted, I did blog recently about how I’m a bit unco on a bike, so when Hubs and I found a commuter bike at The Ceres Bike Shed a couple of weeks ago in Melbourne, I was in love. I’ve been meaning to blog about Ceres for AGES – ever since we bought our bikes from there 18 months or so ago, in fact. Ceres is basically a hippy farm (sorry, no offence) and amongst other things they have this totally awesome bike shed. Basically, you rock up, pick a bike that you want, which may be in good condition and just in need of a bit of tweaking (my first bike just needed a new seat and adjustment of the breaks) or at the other end of the spectrum, you can build a bike from scratch out of all the recycled bike parts. Cool hey? 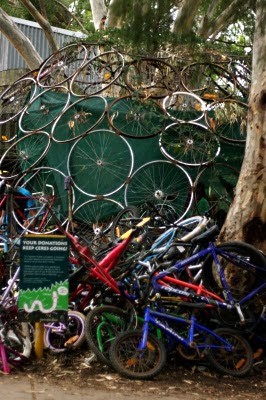 There’s also more of a “shed” looking thing where all the tools are kept. There are volunteers on hand to help you out, but the idea is, they give you some guidance, and teach you so you can learn how to do it yourself. The first bike Hubs chose only needed the gears replaced (or so we thought) but after 2 hours they realised it was actually beyond repair, so he had to choose another one which just needed some minor adjustments. That was our first encounter with Ceres, and we walked away with 2 bikes and a 12 month membership for $100. Not bad hey?

This was our second trip to Ceres about 6 months later when my peddle broke and I needed a new one. I replaced them myself and it cost me a whole $5. I felt very clever indeed. 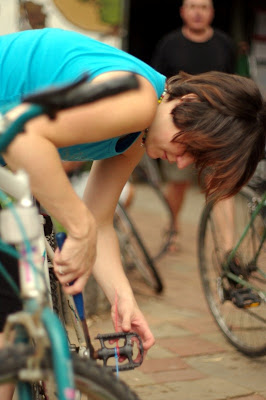 So our third trip was a couple of weeks ago when I found my new little baby. Her name is Daisy. This is not the best photo, but how cute is she??? 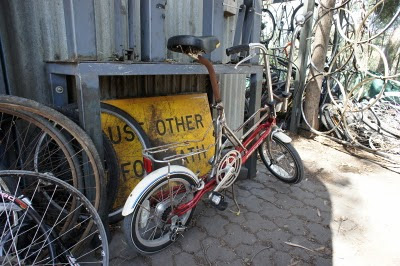 Hubs spent about 2 hours putting in the gears and new brakes while I just stood around and looked pretty. I can’t believe I didn’t take any photos of him working on the bike!!!

Every time I ride Daisy I feel like a clown in a circus (in a good way!) and have the circus tune in my head. You know the one. Just imagine a clown on a little bike with a honky-honky horn and it’ll come to you. I’m going to get Hubs to take a video of me riding this thing. I just love it! It’s so easy to ride and I feel so much more confident than I have on any other bike.

Now. There was a point to this post. Aaaah yes. The loaded question. Our neighbours, God bless them, are very concerned about me and Littlefoot, and worry when they see me walking to work each morning. And don’t even get them started on me riding my bike. “I don’t believe women in your condition should be riding bikes.” I actually waited until one of the drove out of her driveway this morning before I left so I wouldn’t get a lecture! I felt so naughty!