This is the problem with not blogging “live” for a while – too much to catch up on!! For those of you who were in on the secret, the surprise weekend birthday party for Hubs was just brilliant. Maybe I’ll start with that, and work my way backwards. A few months ago, Hubs’ sister and I started planning for her and 6 of Hubs’ friends to fly down to Melbourne, drive to Mt Beauty, and turn up on our doorstep as a surprise to Hubs, and spend the weekend here. I cannot tell you how many times I accidentally nearly blew the surprise. Sleep deprivation does not help with keeping surprises a secret, but I managed to keep my mouth shut and even convinced Hubs to go snowboarding on Friday (didn’t take much) so I could prepare for the arrivals.

The first carload of people rocked up at 5pm and Hubs came home a bit after 6 and got a great surprise! The beers and rum began to flow freely, and by 11:30pm I was beat, so left Hubs and 3 of his mates (2 others had retired earlier) to catch up. I knew Hubs’ sister and other friend were due to arrive after 3am and I could hear Hubs and Uncle Ben – the last men standing – chatting and drinking into the wee hours. I thought they would come to bed, and have Lsl wake Hubs up to surprise him, but Ben had other plans. They were still up when Lsl and Hubs’ mate arrived at 3:30am and he got another great surprise!! I popped out to say hi and set up extra beds, and retired again around 4:30am. Hubs didn’t crawl into bed until 6, and guess who woke up, ready to play with Mama at 6:15am!!! WOO HOO!!!! Thankfully after a little brekky and play, Chanbe and I rejoined Hubs for another hour of sleep around 8.

So Saturday was spent with a walk into town, a visit to the local Tavern, and a push home in the stroller. (I had driven Chance home earlier.) Oh, and Hubs’ last birthday cake for this year. 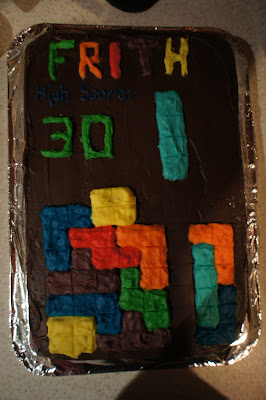 I had had the Tetris cake idea in my head (and in my iPhone reminders) for months, and I was pretty happy with how it turned out.

We spent Sunday at a few wineries and the Bright Brewery, and had dinner at home. At this point, I might share some photos instead of more words.

Hubs at the first winery 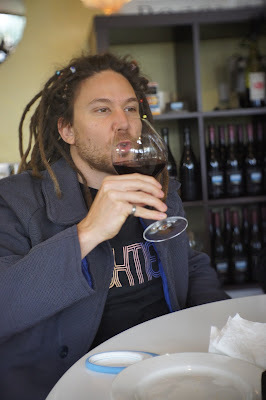 The whole gang at the third winery 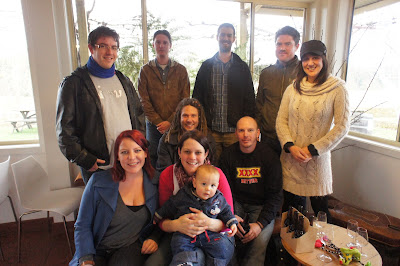 Too cute at the brewery 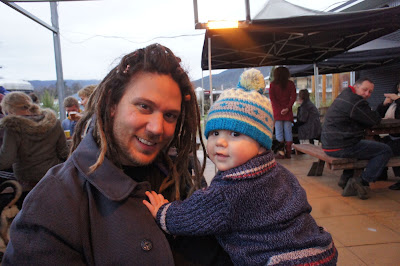 It really was such a great weekend, and quite sad to bid everyone farewell on Monday morning. I would like to take this opportunity to say THANKS FOR COMING – you really made Hubs’ 30th birthday something special x x x