Since being in Brisbane, Hubs hasn’t had a lot of luck with sailing. He has owned his hobie catamaran, “Big B”, since before we were together, and we have had a lot of great times on that boat. For the last 3.5 years however, it has been sitting in his Dad’s backyard, yearning to be free. So the boat was in our front yard within days of arriving in Brisbane.

The first day he took the boat out with BFF Ben, they cartwheeled the cat in really rough conditions resulting in this: 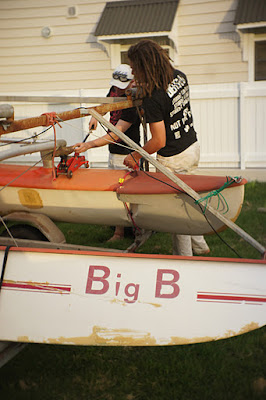 So Hubs and Ben spent an evening building a new boat from the 2.5 boats Hubs owns, and had quite a bit of success. Um, except for the fact that when they took it out, it… um… almost sunk. After more fibreglassing of the hulls, Hubs and another one of his mates Nate had a great afternoon of sailing up and down the waterfront at Margate: 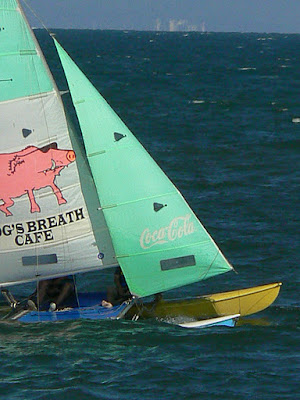 It turned out though, as you can see from the photo, the blue hull was taking on water again, but it was through the pylon, not the bottom of the hull, so Hubs has since sealed this leak and is keen to take “The Phoenix” out again.