As I knew it would be, the last week has been huge, and today is the first day I’ve had more than 10 minutes to sit down and play on the computer. Sunday was a glorious day and we had a lovely walk to Paradise Falls, followed by lunch at Dal Zotto winery. It was such a lovely day with lovely friends, though I was having some annoying pains in my stomach that wouldn’t go away. I was pretty certain it was ligament pain and it eventually subsided in the evening so I wasn’t too concerned. Monday night we had a crowd over for dinner and Revenge and both left us wanting more. Tuesday we dolled up and headed to the races, and, as usual, Chanbe stole the show: 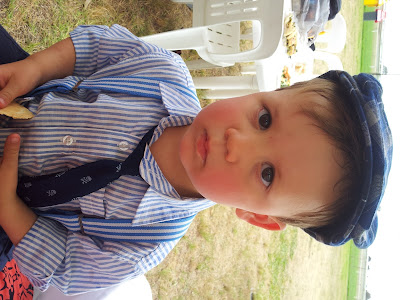 Suspenders were certainly the order of the day for the boys! 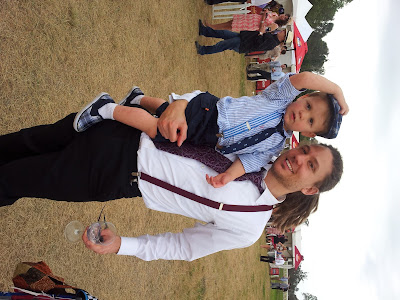 I wasn’t happy with any of the photos that were taken of me, so you can just tell me how dashing my boys looked instead!! Mum and Dad were running a bit ahead of schedule and ended up on our doorstep at 6:30pm Tuesday night, much to Chanbe’s delight! Hubs headed to Shepparton on Wednesday for his final med exams which was very exciting! Thursday was supposed to be spent preparing for the garage sale on Thursday, but the pains in my stomach came back and I thought it was best to get them checked out at the hospital. After 3 hours of monitoring, I finally got to see the doctor who said it didn’t seem like anything too serious, and sent me home. Which was good, but frustrating that he couldn’t tell me what it might be, other than “probably ligaments” which I wasn’t convinced about as it was so isolated to one spot.

I got a fair bit done Thursday night which was good, but at 9am Friday, the pains came back and I couldn’t stand or walk, so back to the hospital we went. It was so much worse that day, and I saw the doctor immediately and he said we’d try and get to the bottom of it. He did an examination and assured me that the baby is absolutely fine, then gave me some morphine and let me rest. He said it was most likely either a kidney infection, appendicitis, or an ovarian cyst that was twisting on itself. After bloods and an ultrasound, they could rule out appendicitis and kidney problems, and although he is pretty sure it’s an ovarian cyst, they couldn’t actually see it on the ultrasound as Baby Baloo was in the way. So he gave me some strong pain killers and said that we’d touch base again the following week, but really there’s not much they would  be happy to do until after the baby is born.

So needless to say, not much got done on Friday for the garage sale until I got home at 6pm. Hubs is now officially finished medicine (woooooo hooooooooooo!!!!!!!!!!!!!) and we decided to postpone our dinner til Saturday night. The garage sale was a HUGE success yesterday, and it was so nice to just relax in the afternoon and know that all the hard work over the last few weeks/months of getting all the stuff ready and making pretty signs etc had all paid off.

That’s enough from me for now. More on our romantic night out soon….