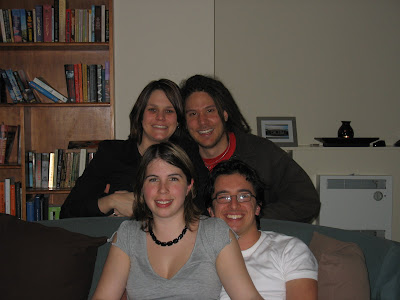 I thought I would celebrate this milestone with a post about another achievement I made whilst holidaying in Brisbane. My 2007/2008 New Year’s resolution was to try a few new things. So I dreaded Hubs’ hair, started sewing again, did some study, and climbed Mt Tibrogargan! (The Gorilla-looking mountain on the way to the Sunny Coast.) I wasn’t sure what to expect to be honest. I thought we were going for a bushwalk/hike, but it felt like more of a climb/scamper!

My sister-in-law used to climb it “for fun” every couple of weeks, and Hubs had climbed it a few times before too. It was insane! They were very supportive though, and managed to get me all the way to the top!

Here are some “happy” (aka exhausted, nerve-racking, insane) photos we took along the way.

At the start, when I was thinking “this isn’t so bad!” 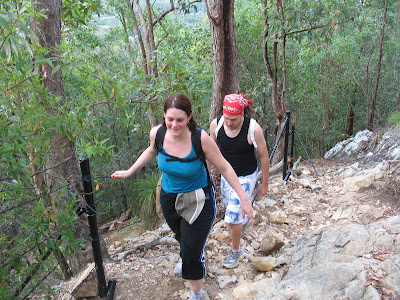 The next part where Lsl PROMISED she wouldn’t take any photos of my butt! Yeah, right. I was starting to wonder what the hell I was doing up there at this stage. 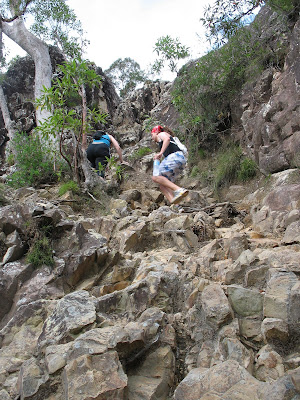 Hub’s thoughts: “I love you”
Wifey’s thoughts” “How the hell am I going to get down from here?????” (click on image for up-close facial expressions!) 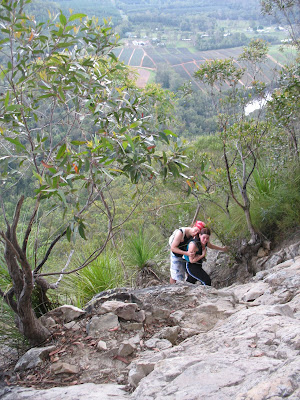 We made it!! The view was amazing! Half way up, I really didn’t think I was going to make it. But I was SO proud of myself, sitting up there on top of the world! 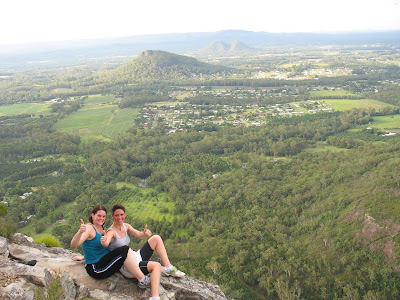 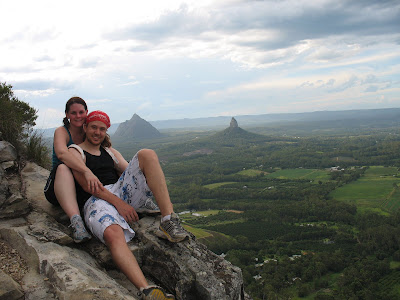 After much slipping and sliding (and torn pants) we were back down the bottom, looking up at the beast we had just conquered. 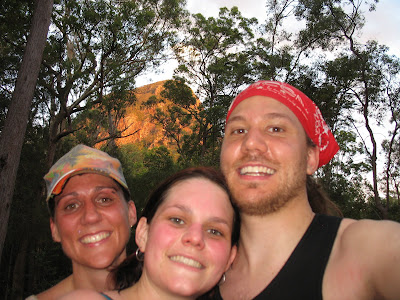 If I had known what I was getting myself in to, I probably would have chickened out, but ignorance is bliss! Thanks for the great experience Hubs and Lsl! Oh, and I NEVER want to do it again! Ha!

Just a quick post to mention that I played hockey for the college this “season” and had a blast! I was the oldest player on the team (by about 6 years) and probably the most unfit too. But the girls were heaps of fun and very encouraging to an old gal like me!

College sports are generally played in September and October, and you only play about 6 games if you play all the way through to the grand final. Which we did! Both the Newman Boys and Newman Girls played in the grand finals this year which was terribly exciting. Unfortunately, after VERY close games, we both lost. (Boys 1-0, Girls 2-1). It was a little disappointing, but the girls will be back next year to try and end Ormond’s 11 year winning streak!

Here’s a team photo after the game: 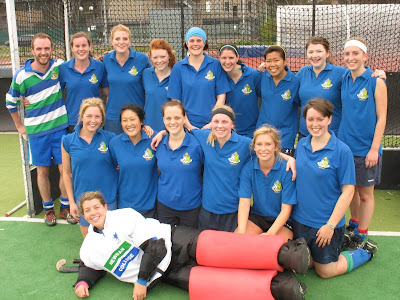 I am desperate to blog about our weekend back in Brisbane, but until I can upload the photos, there’s just no point, as they explain our weekend so much better than I ever could with words.

So in the mean time, let me tell you about a new sport Hubs and I are playing. Ultimate Disc! (aka Ultimate, flying disc). It is SO much fun and very good for our fitness. My friend from high school and her partner are very into it and invited us along for a game a few weeks ago. Actually, it was 3 games and we ended up playing for 2 and a half hours. That’s a LOT of running.

It’s kind of a mixture between netball and gridiron. Kind of… We play in Albert Park (St Kilda) on a field about 100m by 30m and there are end zones where, if you catch the disc whilst in the zone you score a point. You start the game and each point with 1 team at each end of the field, lined up Braveheart style. At the start of each point, one team starts off in attack, and the other team “pulls” the disc (throws it as far as they can) and are on the defense. We play either Man-D (pick a player and mark them) or zone defense (which we’re still getting the hang of). You can’t run with the disc (like Netball) but you can take a few steps to slow down once you have it. You’re often sprinting when you receive it, though in my case, it’s more of a fast jog.

As I mentioned, there’s a LOT of running and it’s very fast-paced. The good thing is, after each point you get a bit of a breather. The game finishes either when 1 team has scored 15 points (half time is at 8 points) or after an hour and 20 minutes has passed. It’s self-refereed which makes it a very honest game and Ultimate is all about the Spirit of the Game. So much so, that they have Spirit Captains whose job it is to keep the game running smoothly.

Last night Hubs and I both had a great game. Hubs took a massive leap in defence which prevented the opposition from scoring a goal and our Team Captain was so impressed that he ran on to the field to give Hubs a high 10! He told me on the sideline that people will play for 10 years without ever pulling off such great defence. I was so proud. We both went on to score goals in the game as well – Hubs scored 2 and I scored 1. We won 15-4.

At the end of the game we all huddle in a circle, ensuring we are standing between 2 opposition players, and the Captain of the losing team (different to Spirit Captain) thanks their opposition for a great game and perhaps shares how they felt the game went, and gives the team 3 big cheers. Then the Captain of the winning team does the same. It’s a bit mushy but it’s actually a pleasant way to end the game.

It’s a nice way to start the week on a Monday night, though when we play the 8:30pm games, we don’t get home til almost 11! Lucky I’m working so close to home these days. 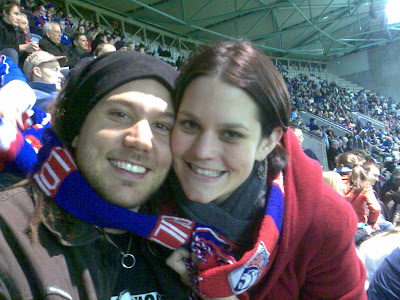 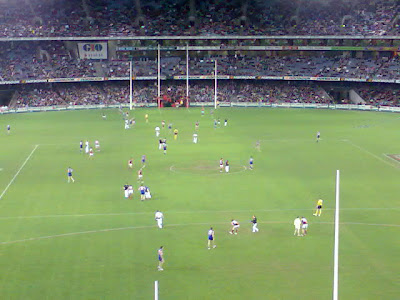 I’d like to paint a picture for you. A lovely Sunday afternoon in Melbourne (such a thing DOES exist), some wine, cheese and bickies, a picnic blanket, great company, and a huge oval field of luscious green grass. At each end, 4 giant poles stand in anticipation of the game that’s about to begin. The referee takes the field, looking a little worse for wear – like he’d had a big night out the night before. On one side are the Ormondians, geared up for the 4th and last game of their short season. And on the other side are the Newman Stars.

For those who don’t know much about arial ping-pong (aka AFL) 18 players from each side take the field and not only did 18 Newman boys run on at the start of the match, they had another full team on the bench. Such is the excitement of playing college football.

A bit of background information for you about the Newman boys: They have 2 teams at the college, The Firsts (like Australia) and the Stars (like Australia A). The Firsts generally do very well (incidently they are playing in the finals next weekend.) The Stars have got a lot of heart, but not much of that translates to points on the scoreboard. In fact, the Stars team hadn’t won a game since 2005. But in the first few minutes, they proved to their opposition that they were going to put up a fight. With 2 early goals in the first 5 minutes, they just about passed their total number of points scored all season. And it didn’t stop there!

The points kept coming, and in the middle of it all was a young Queensland boy, in boots bought only an hour before kick-off, who was putting his body on the line for his team and for College pride, and on the sideline sat the most proud, impressed Wifey you can imagine! I was also accompanied by a few friends who came down to watch and it was so much fun! One of Hub’s friends even came all the way from Brisbane to watch him play!

Hubsband had an absolute ball and after his first game a couple of weeks before, he started using tactics (trying not to get killed) and really got in to it (sometimes involuntarily!!) The final score was something like 65 to 20 and it was a great afternoon. Here are some happy snaps:

Hubs about to take a classic catch (oops, wrong sport) a MARK during warm-up (doesn’t he look sexy in his jersey!!??) 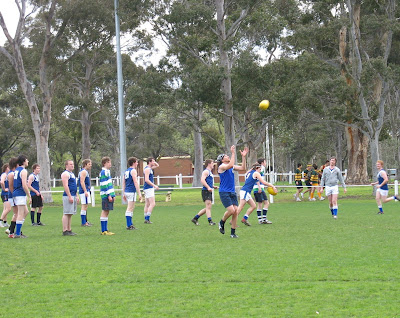 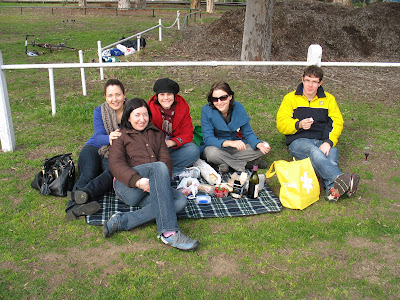 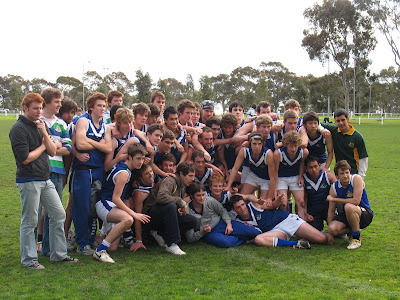