Weeeeeeeeeeeeeeeeee! What a great few days I’ve just had! As previously mentioned, my friend Ah-dele booked herself in to come down to Melbs for the State of Origin and the Broncos vs Melbourne Storm (“I hate those Melbourne players”) game.

Here we are geared up for the State of Origin: GO MAROONS!!! 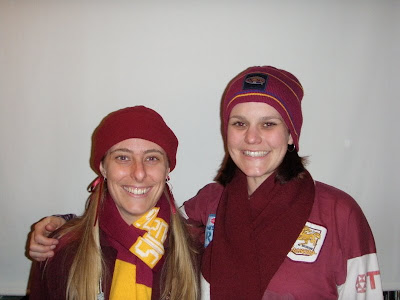 The atmosphere was really great and there were over 50,000 people there which is only a couple thousand off a full-house for footy games! It was SO much fun. 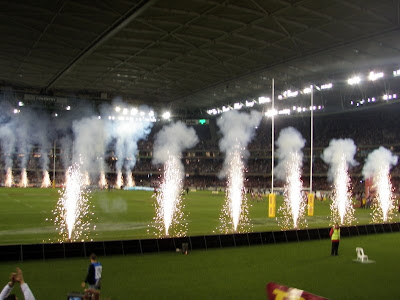 We even ran into a few people we know who happened to come down from Qld for the game! It was quite a close game, though the score (28-18) doesn’t really reflect that. The last 10 minutes were particularly exciting, and even though I never thought we were going to lose (not really, anyway), I realised that I’m out of “footy match watching” practice. My heart was racing!! Subsequently, I lost my voice again, but was TOTALLY worth it!

So then Friday night came around, and we were very excited to be heading out to Melbourne Olympic Park for the match. It’s a very old-school stadium and only seats just over 10,000, as well as standing room for a few thousand more. I reckon there were about 14,000 people there and probably less than a thousand Broncos supporters. It occurred to me that I’d never been to a game where my team’s supporters were so vastly outnumbered, but there we were, Broncos scarves (thanks TM!) and beanies and gloves and lots of enthusiasm: 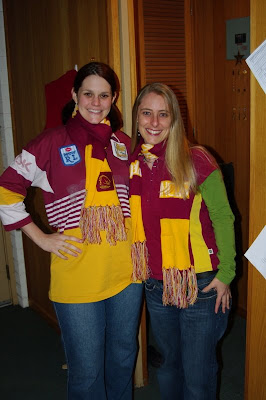 Unfortunately, we got completely annihilated. 48-4 was the final score and we were gutted. It was never going to go well, 2 days after the Origin, and missing Hodges and Lockyer, but we couldn’t prepare ourselves for such an onslaught. We were NOT happy Jan!!! But credit where credit is due. Melbourne had almost as many players in origin as we did, and they had a blinder of a match. They just couldn’t put a foot wrong. Luckily, Melbourne is my 2nd fave team, so I don’t hate them too much for humiliating us!!

We left the game and headed to the Turf bar to drown our sorrows in cheap champagne and cheesy 80s and 90s music. A great end to the night!!