On Saturday night, Hubs and I were invited over to dinner by our friends Rohan and Miya. Hubs and Rohan study together. Miya is half Japanese, and they treated us to a Japanese dish called Shabu Shabu. And as Hubs put it “It wasn’t just a meal, it was an adventure!”

We got to cook our own fresh ingredients like carrot, cabbage, fish, tofu, spinach, spring onions and bean sprouts and noodles and “fish” them out when they were done! Then we placed them in our sauces which were ponzu sauce with spring onion, or sesame sauce (my fave!) and then onto the rice. I can still taste the yumminess of it all! And it was so healthy as well! Just boiled ingredients and tasty sauces. I wanted more and more but just couldn’t fit any more in!

We then finished off the meal with a lovely self-saucing chocolate pudding and some of my choc-dipped strawberries. It was a lovely evening with new friends and we can’t wait to go on Rohan’s Dad’s yacht some time in the near future! (Now you HAVE to take us! Ha ha ha.)

Here’s a photo from the evening – check out the awesome set-up! 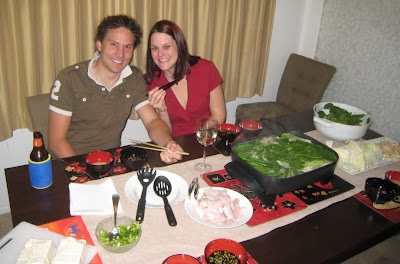 And hopefully a photo of Rohan and Miya to come (cos I forgot to take one of them on the night – I was distracted by the food!!!!)