This was our first really big driving day and we were well prepared after a good night sleep (mostly – it was pretty cold!), some great sunshine, pumping tunes and snacks; you know, like Beef Jerky!

It took me a few pieces to really get into it, but after that I was hooked! We even bought some at Woollies the other day!

We left around 8am and the weather started out lovely, but when we were stopped at Cracker Barrel for lunch, it absolutely poured with rain. Lucky we didn’t get caught on the road with our top down! (That happened later!) I decided to broaden my horizons and try gritz. I had it with some eggs and it was okay. At least I could tick jerky and gritz of the list! We also popped in to WALMART (we love Walmart) for some better road maps and another cool t-shirt (Hubs bought 5 in total – $7.50 each… BARGAIN!) and then we were back on the road.

The lanscapes were just gorgeous! 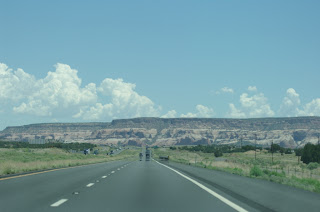 But the weather was a bit temperamental so we didn’t have the top down much that day. We decided it was our duty to introduce the USA to some good Aussie music so we had a bit of Hilltop Hoods, The Cat Empire and Missy Higgins pumping through the speakers. I also found that I don’t get car sick when riding in a convertible with the top down (except on long, winding roads – more stories later) so I’ve determined that from now on, it has to be a convertible all the way. The kombi needs some work 🙂

It was a pretty long day of driving, just over 1000km, and it was made even longer by the fact that we had to cross 2 time zones, losing an hour each time. However, the speed limits were up to 75mph (120km/h – weeeeeeeeeeeee!) so we did it quite comfortably. Driving around sunset was particularly beautiful. 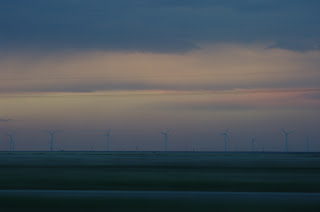 And everything is BIG in the US of A! 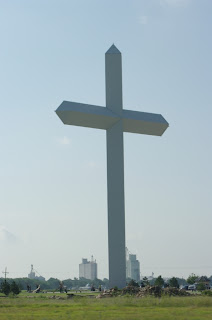 We arrived in Amarillo, Texas, around 9:30pm which meant it was still twilight, and decided just to order in pizza and chill out, as we had another substantial driving day ahead of us!