We were at our friend’s place for dinner a few weeks ago, and Hubs was having a great time playing with their eldest son (who’s 3 years old), building fun things out of Duplo. Hubs finished his project and showed me: 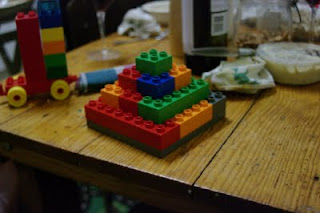 I was impressed and said
“Honey, that’s a lovely pyramid you’ve made there!”
To which Hubs responded
“It’s not a pyramid. It’s clearly a ziggurat.”
Wifey: “A ziga-what? Stop making up words.”
About 5 seconds later, my friend’s husband walks in, sees Hubs’ creation, and exclaims
“Aaaah. A ziggurat!”
I kid you not.

I was convinced he had heard us talking but he was adament that he was mearly stating the obvious. Yeah. Real obvious. Who the hell has heard of a ziggurat!!??