We did it! We moved out of our house in Wang, had the cleaning etc done, and got outta there in time. We had our last Bead Shop coffee in the morning, and handed over our clown bike to the dear owners. 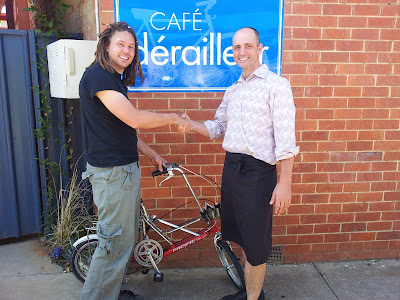 We then handed in our keys and had a farewell lunch at Espresso on Ovens – one of the first places we ever had coffee in Wang. We farewelled Juan and he wished us well in our next adventure.

The last thing we had to do was pick the kombi up from the mechanic, who basically said “good bye and good luck!!” We knew it was going to be a rough ride, but we hoped it would get to Brisbane okay, so we left Wang the same way we arrived 2.5 years ago – Hubs at the wheel of the kombi, me by his side and up the duff, and running late. It was bitter sweet.

We headed up the Hume Highway, and after a quick rendezvous north of Albury, we decided to take the coast road (for various reasons.) The Falcon was struggling a bit under the weight of the BIG TRAILER… 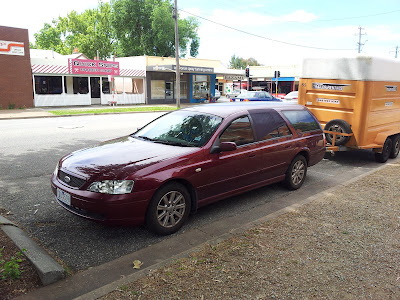 though, we can’t imagine why! So the next morning, after a night in Gundagai while Chance was with the babysitter…

… the boys did a re-pack and evened things out somewhat. Things were looking up! And then we hit the road. And the Falcon stopped. And it just got worse from there. We were going to try and make it to Mittagong for lunch, then north of Sydney for the night. Instead, we made it to Mittagong for lunch okay, but didn’t leave that night. The Falcon went to the autoelectrician, and we went to a motel.

But the fun didn’t stop there. The kombi started playing up as well, so that went to a different mechanic. So this morning there was a lot of hanging around and praying. And playing!

By 3pm, both cars were back on the road, but only slightly fixed – enough to get us to Brisbane (please please please!!!). So there we were. 80km south of Sydney, peak hour approaching, and the desire to get a 3-car-convoy through to the other side, without a) breaking down; b) getting lost or c) going crazy.

So Mum, Chanbe (who fell asleep immediately) and I led the way for the 150km journey. It was a little terrifying, and just after we got off the toll roads (remind me – I need to pay some tolls!!) we lost Hubs. I got a text, assuring me he would be okay, so we just ploughed on. We all met up in Gosford just after 6pm and I have never been so proud and relieved to get through traffic in my LIFE! We did it!!

So after 2 and a half days, we have traveled less than 800km, but all in all, we’re really only a day behind our very loose schedule. If all goes to plan (which nothing has so far!) we will make it to Grafton tomorrow for the night, then arrive in Brisbane on Saturday afternoon. If nothing goes to plan, (which seems much more likely!) at least we’ll have more travel stories to laugh about in times to come 🙂