Skip to content
I remember about 10 years ago, a few months after I had found the perfect Black Colorado slip on sandal, thinking that I should have bought another pair of the same shoe to keep for when I wore my current ones out. By that stage they were out of the range and you couldn’t buy them anymore. Plus, at $100 a pair, I did find it a bit hard to justify. The shoe gods had other ideas however, and a couple of months later as I was browsing the Lifeline store not far from where I was working (don’t ask me which job it was. Maybe this one??) and I happened across the exact pair of said sandals… In my size… barely, if ever worn… For $9. I couldn’t believe my luck!
Now I don’t normally buy second hand shoes – they have to be in near-perfect condition and look like they’ve never had someone else’s smelly feet in them. Especially if they are shoes that you don’t wear socks with. Yeuch. Thankfully this pair ticked all the boxes and I was rather pleased with my find.
Anyway, this story isn’t about second hand shoes, it’s about buying another pair of the same shoes when I come across a winner. Early last year, I bought a pair of Piper ballet flats from Spendless Shoes in red, featured in this post. About a month after I bought them, I went back and bought the same pair in black.
And since then, this has happened: (note, the black and red pairs are actually replacements for the 2 original pairs I bought and wore to death.) 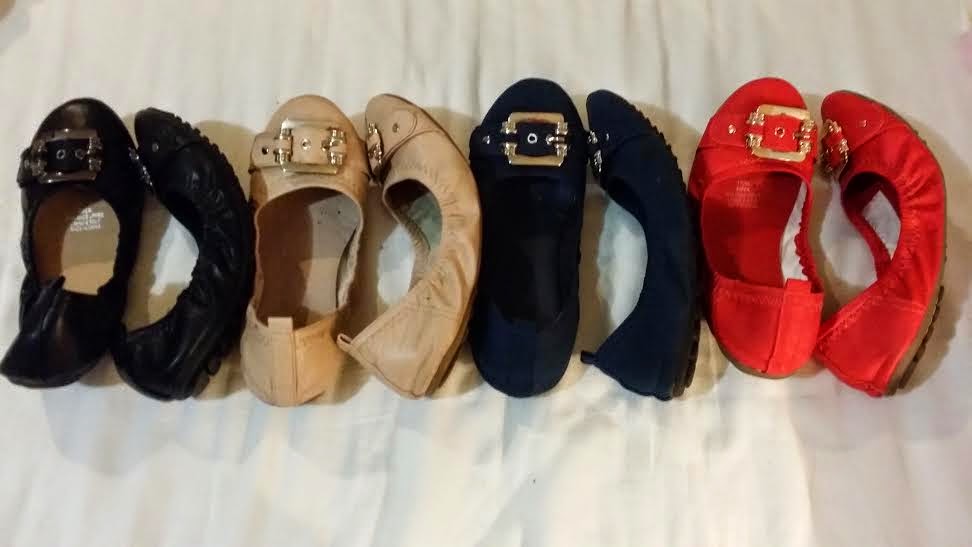 So that’s 6 pairs of the same shoe in total.
When does love become an obsession? I love these shoes. They are incredibly comfy, super cute, and the range of colours makes them extremely versatile. Plus I’ve told so many people how amazing they are. AND they’re still in the shops! Perhaps not in all the colours and sizes, but they are there! I have refrained from buying ALL the colours – I think I’m missing the brown, white and pewter. They are a fairly cheap shoe, so they don’t last years like better quality shoes, so that’s why I’ve bought them in bulk.
They really are a winner!