I’ve written about my Nanny and Grandpa previously, and they have had such an amazing life that I could do a hundred posts about them. Today I would like to tell you about Cooking With Nanny. Nanny has been cooking for a very long time. She learnt to cook a lot of dishes when she was growing up in Ukraine, then some more when she was in Germany during the war, and she has continued to learn since being in Australia.

Of course she has a few staple dishes that we LOVE, and today I’m going to tell you about Cooking Pierogi with Nanny. When we were up for Christmas, Hubs and I stayed at Nanny and Grandpa’s place just before Christmas and I wanted to get some photos of us cooking together. Hubs did one better than that, and did some videoing without me knowing! It was such a lovely surprise when I got to watch them later!

First of all, you mix up the ingredients for the dough in an old saucepan that Nanny and Grandpa bought in Germany, around 60 years ago. Nanny doesn’t really measure things. It’s more like “2 big spoons flour, a few egg, some milk.” 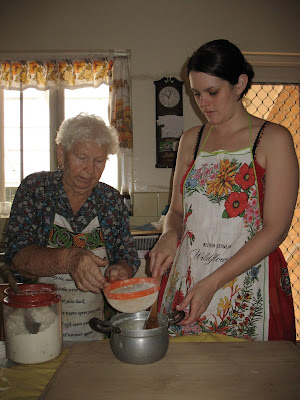 And then you knead it like so: (listen to the audio! Classic Nanny!)

Nanny has the most amazing hands – they have been through so much, and I’m sure would have many stories to tell.

After kneading the dough (then letting Nanny knead it properly) you need to do some rolling. I’m pretty good at this part:

Next you cut the dough (it’s actually more like pasta) with Nanny’s aqua cup. It makes the perfect circle size for the pierogi. (Funny audio again):

And finally, the making of the pierogi. You put a heaped spoon of mince (hand-minced, prepared by Nanny the night before!) Again, listen to the audio. Priceless! 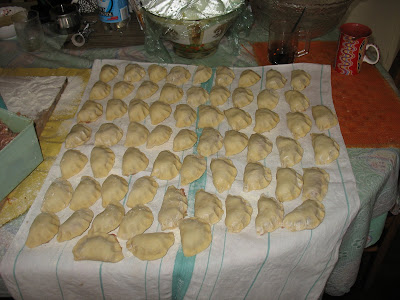 Then you boil some water and cook them in boiling water for 12 minutes: 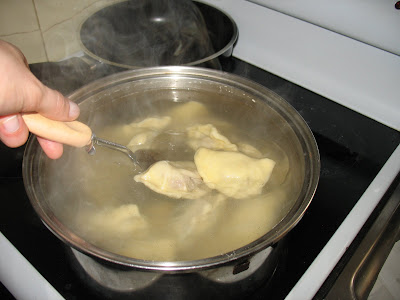 Then put a wad of butter in the fry pan and go to town! This is the step that just makes them soooooooooo goooooooooood! 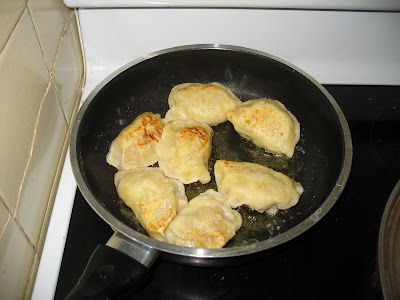 Oh! And for extra fatty goodness, don’t forget to fry up some bacon (til it’s super-crispy!) to put on top! Ta daaaaaah! 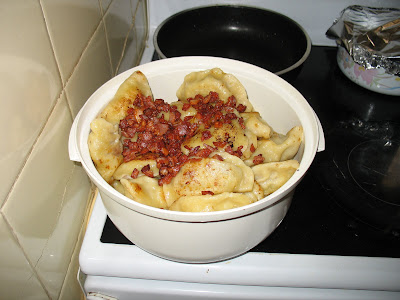 I really want to try making them myself down here in Melbourne. That really should be a New Year’s resolution!! Watch this space!