Another cruisey day of driving today and not too many photos to show for it I’m afraid. We were very impressed by the beautifully manicured highways on Louisianna though! 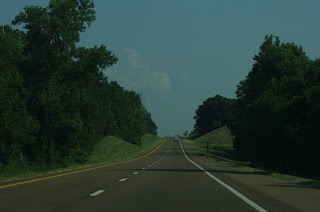 We took the Lake Pontchartrain Causeway – the longest bridge in the world at 23.8 miles – over to New Orleans and got a great view of the city skyline, including the Louisiana Superdome. 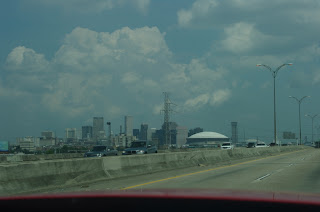 I wasn’t sure what to expect with New Orleans, as we had had quite a few people telling us that it was still in really bad shape since Hurricane Katrina, but what greeted us was a friendly city with lovely people, great food and a slowly rebuilding economy. But more about that later.

I had booked a place to stay in New Orleans on line, and we arrived around 1pm to a luke-warm welcome. This is where we stayed: 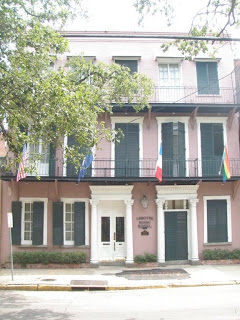 The Lamonthe House is a guest house on Esplanade Ave, New Orleans. It really was quite sweet but the customer service was very poor and on the first night we had a shower with the world’s worst shower head (seriously SO bad) and then we broke the bed (we were just sitting on it! I SWEAR!) and it seemed a great inconvenience to them that it was 8pm and they had to move us. Anyway, the 2nd room they gave us was a bit bigger, but the shower was as bad, if not worse than the first! But we weren’t there to sit around doing nothing, so before all that happened we went out to a late lunch at The Praline Connection and shared a mixed plate of fried chicken, jambalaya, red beans and rice, ribs, corn bread, greens, and butter bread. It was a very hot and humid day (like summer in Queensland!) so we also had a couple of local ice-cold beers. The serving was rather large, and we ended up taking the butter bread home for dessert later. It started raining on the way back to the guest house, so we decided to have a little nap.

And when we woke up we took a little dip in the pool! (with the waterproof camera!) 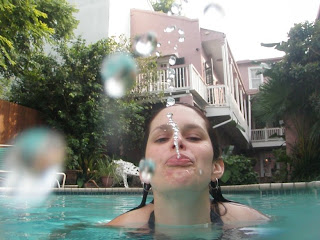 We didn’t feel like eating again so we just went for a walk up along the water, down Canal st, and then completed the loop down a bit of Bourbon st and a bit of Decatur St. 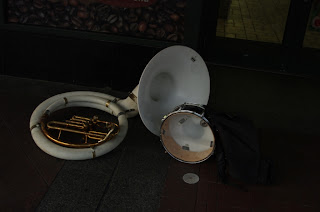 It was a lovely night for a walk and we were still feeling full from our meal at 3pm so we just went home and finished off the butter bread with a couple of drinks and enjoyed each other’s company. This was the start of a lot of walking, swimming and eating!