So we’re onto season 4 of Boston Legal and again, it’s taking me a while to get into it. It happens every season. I get attached to characters, the stories are going great guns, everything is making sense and I’m in my groove. Then we start a new season and all of a sudden old characters have disappeared with a vague explanation like “since Denise is on extended leave” or sometimes they just vanish with NO explanation at ALL! Like Claire! Do you know how annoying that is?? It’s like the character didn’t even exist!

But I can’t help but adore the show. I’m addicted. We finished Season 3 last week and didn’t have Season 4 straight away I kinda panicked a little! But it’s okay, we’re onto Season 4 now, which brings me to the point of this post.

Saffron Burrows aka Lorraine Weller. Now don’t get me wrong. I liked Saf in Circle of Friends, and I liked her in Troy. But in Boston Legal, all she does is walk around looking all leggy and necky and dopey. 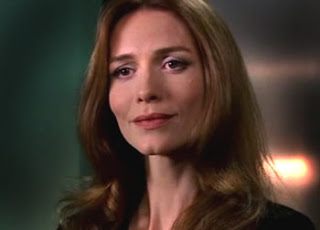 She reminds me of Janice from The Muppett Show. Seriously. 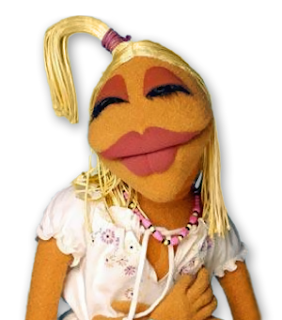 She has no substance! Or if she does, I’m yet to see it. She’s just on the show for the sex appeal, and really I’m okay with that. I mean, you can’t watch BL without being okay with a bit of sexism in the script. I don’t know how they get away with it, but I think it’s partly due to the fact that they’re so damn blatant about it. But Saffron’s character takes it too far. She’s just too much snooty and not enough depth.
I don’t know how many more snooty huffy drippy looks I can take from this woman!!!