A couple of weekends ago, Hubs and I ventured over the Bass Strait to Hobart and beyond. We arrived around 9pm on the Thursday night and were picked up by the shuttle and taken straight to our B&B. Unfortunately, the room we had was right on Macquarie st – the main one-way street into the city, so from about 2am onwards, the trucks rolling in ensured that I had a poor night sleep, and in turn, so did Hubs. Oh well. We got up (grumbling) around 8:30, had some brekky, and went to pick up our hire car. We were given a map of the Huonville area, and we made our way out to the Tahune Airwalk – a must see when you visit Hobart!

The trip there was half the fun! The roads were lovely and the scenery just gorgeous. We drove along the Huon River which was certainly a sight to behold. It actually reminded me of the Hawkesbury River, but on a much smaller scale. We stopped in at Huonville for some snacks and supplies, and also in Crabtree to check out the local shops – both delightful little towns!

We arrived at the airwalk and paid for entry. The place is run by Forestry Tasmania, and is set in the Tahune Forest Reserve. Although a bit pricey, ($46 for both of us), it was a lovely way to spend a few hours and take some happy snaps! (We did the Airwalk and the Swinging Bridges Circuit.) 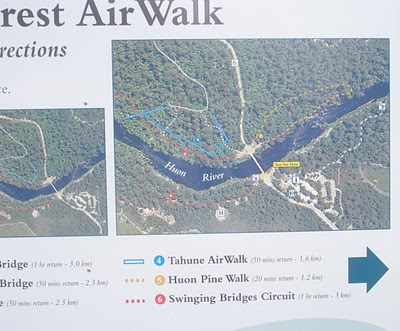 Hubs on the Airwalk 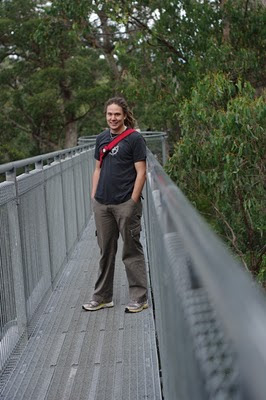 Wifey throwing a coin onto the stump… 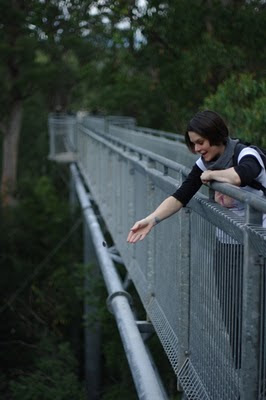 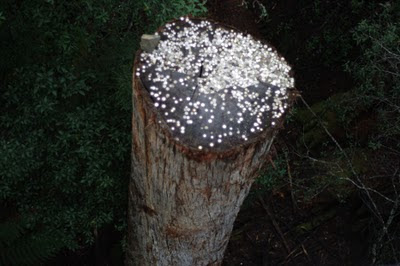 Wifey braving the counterlever. Man than thing moves a LOT!
(my thoughts at the time: “Hurry up and take the picture before all those people come and join me!!!!!!!!!!”) 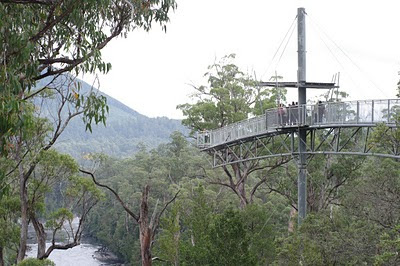 The obligatory Hubs and Wifey shot 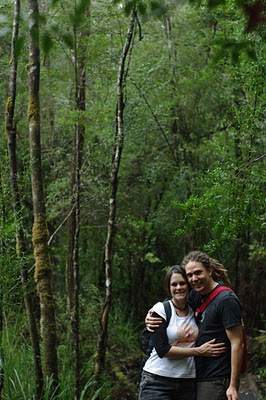 One of the suspension bridges. Not very scary – very cool indeed! 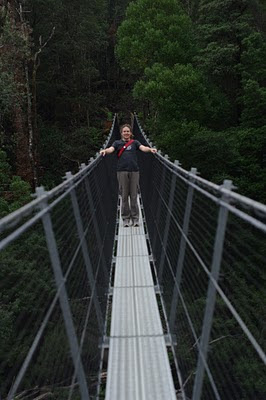 Hubs, as usual, took some beautiful photos and is experimenting more and more with his camera, lenses, lighting and panoramas. There are too many to feature here, but I will certainly be putting more up later on. We left the airwalk around 2pm (after an iced chocolate and sausage rolls!) and headed up the very steep road to Mt Wellington. We could feel the air getting colder, but nothing, and I mean nothing could have prepared me for the icy cold wind we encountered at the top. Oh. My. Gosh. I was NOT HAPPY! 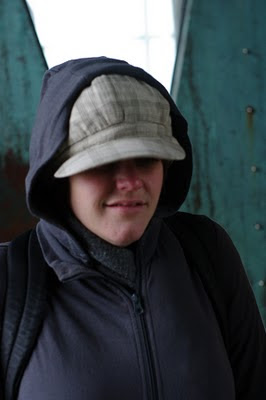 Shocking photo, but I had to show you the pain I was in!!!! What this photo doesn’t show was how much Hubs was laughing at me!! It felt like about 5 degrees! I told asked Hubs to go and take some photos while I took shelter so we could get the hell out of there! A photo of Hobart and the Derwent River. 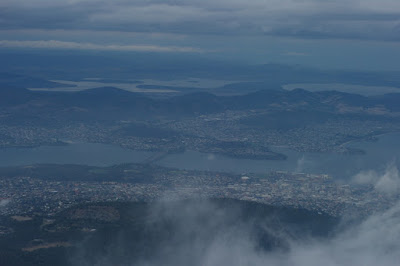 We drove through some fog/cloud on the way down and headed back to our B&B. After dropping the car off, we walked down to Constitution Dock for some fish ‘n chips – it was Friday after all! We picked a pontoon (after too-ing and fro-ing about 5 times!), ordered our dinner, and sat on one of the piers to eat. A great end to a great first day in Tassie! 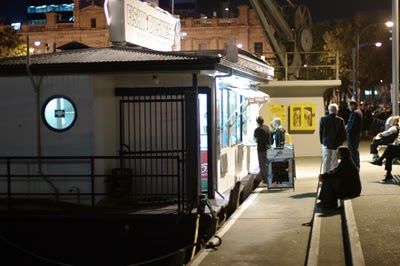