One of the things I was most looking forward to about having our own place was all the cooking and baking I was going to get to do. And it has been fabulous! I have been baking up a storm of pumpkin choc-chip muffin cookies, ANZAC bikkies, macaroons, and last weekend, rusks. Being married to a man with South African blood in him, rusks were always something that I wanted to learn how to make. So armed with a recipe from his uncle, and assistance from his Ma, I went to work.

On a side note, I had gone to a garage sale that morning and seen one of those huge ugly silver mixing bowls and thought “hmmmm…. might that come in handy? Naaaaaaaah…” As soon as I started mixing the ingredients (which included almost 2kg of dried ingredients) I was kicking myself for not buying it!!

Anyway, back to the baking. I had to mix the dry ingredients together, then the butter, sugar, eggs and buttermilk. 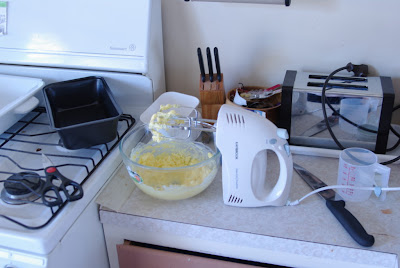 Note to self: need larger mixing bowl so as not to spray buttermilk mixture everywhere while mixing 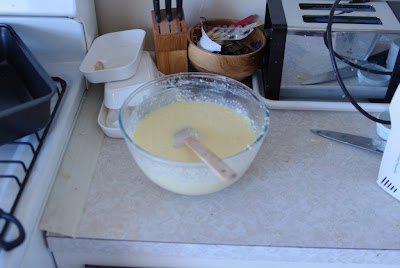 Next I mixed the dry ingredients with the wet ones, using my hands and making a huge mess. FUN! Again, I had to mix in 2 bowls and then combine the 2 at the end. I lined 3 baking trays but only ended up needing the 2. 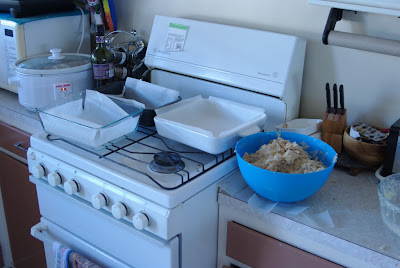 Then I pressed the raw mixture into the trays 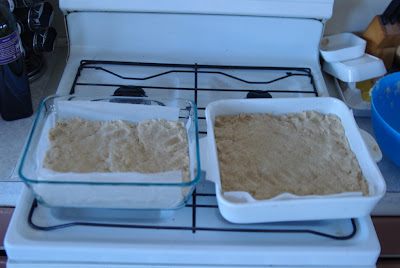 The recipe says to bake for 50-60 minutes but after an hour I smelt the goodness and checked it out. I really should have swapped them over half-way through, cos one of them was VERY well cooked and the other wasn’t done in the middle so I had to put it back in. 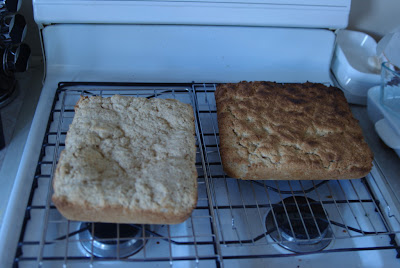 Then you let them cool for an hour or so and cut them up. The next process dries them out to crunchy-goodness. 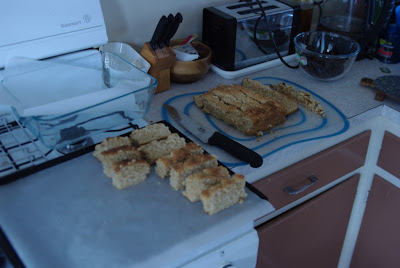 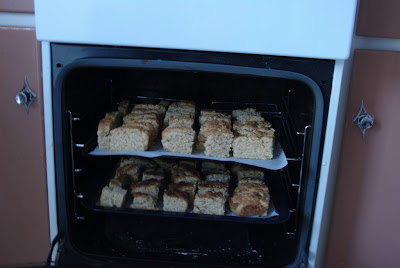 In the meantime, cook yourself an awesome omelette with your farm-fresh eggs you got for $3 a dozen from a lady at work who has her own chickens. (see the rusks cooking below?? The smell was heavenly.) 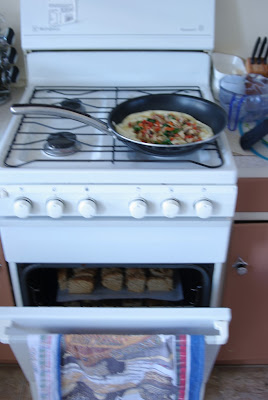 And bring them out, nice and dried, and wait impatiently for Hubs to get home and be mega-impressed! 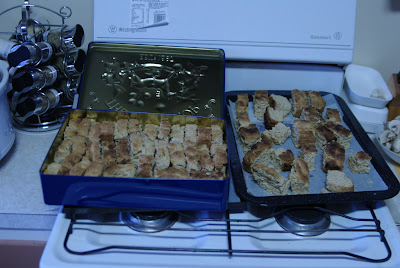 Remember for next time: don’t have the oven open so much, to increase drying-out; use bigger bowls; buy a bigger tin (this one only fit half of them!); let them cool more before cutting them so they don’t all crumble on me; cut them into longer pieces.
I’m hoping these last us at least a couple of months, though, the way Hubs has been going through them I might be making the next batch before too long. The idea is, you make a whole bunch (I probably made about 100) so you don’t have to make them very often. It was lots of fun, but I’m not sure I’ll be lining up to make something like koeksisters any time soon. Not without the expertise of an experienced SA cook at least!! 🙂