Hubs informed me the other day that Macarons are “back in vogue”. I wonder if that happened before or after I baked them a few months ago, and then again a few weeks ago. I don’t like to say I’m a trend setter, but that seems like too much of a coincidence if you ask me…

You see, the thing about macaroons, is that they are a LOT of effort, but the reward is seemingly worth it because they are just so damn good. These are pretty much as far from “3-step-baking” as you can get. The first time I made them, they were a bit of a novelty. I doubled the batch as Hubs’ cousins said that the recipe didn’t make that many. It took me all evening to make them and probably half of them were fit for other people’s consumption, and the other dodgy half were consumed by Hubs and I over the next week or 2.

A few weeks ago I volunteered to provide morning tea for our staff meeting here, and decided to make my stock-standard pumpkin choc-chip cookies and choc-dipped strawberries and some cheese scones. I thought I should make one more thing so decided on macarons. I had all the ingredients, so why not?

Why not? WHY NOT??? Cos they take freaking FOREVER!!! It’s one thing to have a whole evening to cook them, but to try and fit them around cooking and preparing 3 other things was not one of my finest ideas. At one stage when I was half-way through making them, and making noises of “I can’t BELIEVE I did this to myself”, Hubs said something along the lines of “I did think you were being a little adventurous/optimistic/CRAZY baking those.”

Here’s the process, simplified as much as possible: Mix dry ingredients, beat egg whites, mix all together, put into awesome piping tube, pipe 3cm circles (that look like little turds) (sorry, that’s gross) (but I’m leaving it in), bang baking tray down to flatten them in to 4cm turds circles (this didn’t work very well for me), dust with icing sugar, bake for 10-15 minutes or until slightly brown on top, cool on tray, then take off baking paper. Repeat until all mixture is used (I made about 70 “halves”). In the mean time (cos you have nothing to do while they’re baking… yeah right) make or reheat your ganache. The first lot I made I used the jaffa ganache I had leftover from Hubs’ birthday cake and it really added a great flavour to the finished result. Then you match up the halves into equal sizes, (and end up with 10 random ones at the end) and spoon in the ganache and put them together. 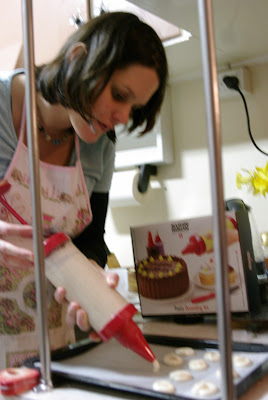 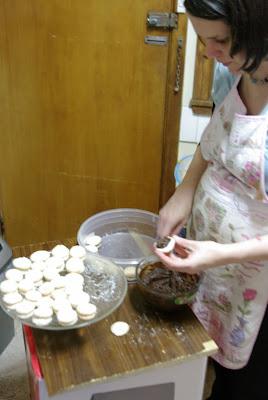 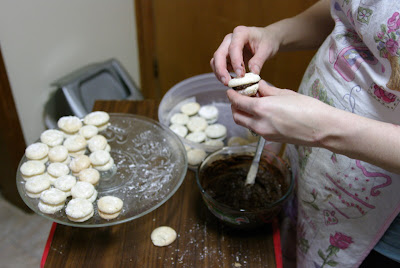 See? Just like that. This is certainly a recipe to make when you have time and patience and a good playlist running on your media PC. But as I mentioned, the end result is very impressive and delicious and I got thumbs up all round for my baked goods. I don’t think I’ll be making them again in a hurry. (har har…)