There’s so much I haven’t blogged about and don’t know if and when I’ll find the time!! I have some time tonight so might line up a few posts for the next few days. Here we go!

Hubs and I celebrated our wedding anniversary a week late this year, with a lovely lunch at The Idle Book Cafe in downtown Wang, and the exchanging of gifts. Hubs gave me two gorgeous titanium tension-set rings that he ordered off an etsy site that I just happened to leave open on the computer. Hee hee! He gave me one with a mystic topaz stone in it for the birth of our baby boy (topaz is the birth stone for November) and one with alexandrite in it for our 3 year anniversary, just cos he liked it. 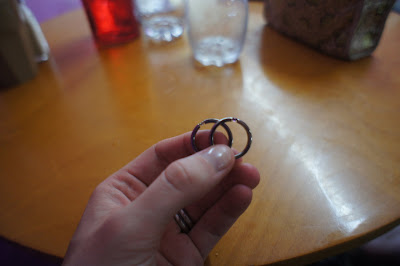 The previous week, I found some energy drinks in the fridge and asked Hubs about them, as neither of us drink energy drinks. His response was “it’s not important” which means he’s up to something. I asked if I would find out eventually and he said yes so I left it at that. And this was what he was working on: 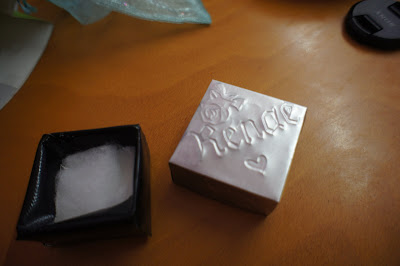 I was super impressed and a copious number of brownie points were given. Even if he did spell “Wifey” wrong (hee hee). Love love LOVE the rings. 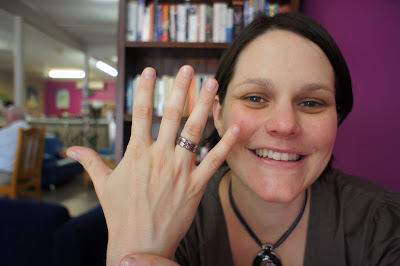 Hubs did very very well, and I think I did pretty well with his prezzie too. I wanted to buy him a leather belt, as leather is the symbol for the 3rd wedding anniversary (according to some). Of course the wrapping is part of the fun of gift-giving: 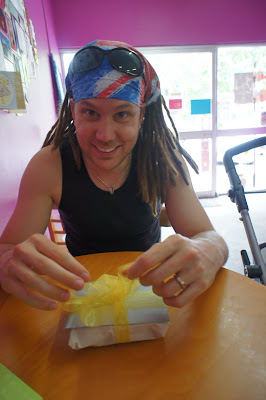 And the gift? A VW leather belt. You can’t see it very well here unfortunately, and I’d take another photo of it but Hubs isn’t home and he happens to be wearing said belt. 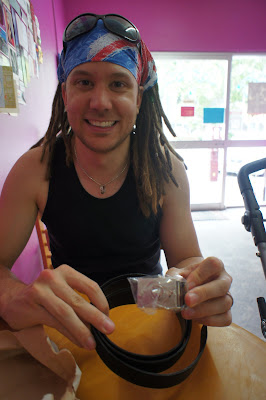 If you look really hard you can see it! We shared some lovely toasted foccacias and iced coffee and chocolate and afterwards headed across the road to do battle with Centrelink, but clearly I’m not going to tarnish this lovely story with that rot.
Happy Anniversary Hubs!