After our late bed time Saturday, Chance had a bit of a rough night, so I was more than pleased when he went back to sleep at 7am and didn’t wake us til 9am Sunday morning. We rushed around and got ready for church, and were our usual 5 minutes late which isn’t bad all things considered. The service was run by a visiting minister from Albury and his message was really great. I’m so glad we made the effort to go. We did the usual mingling afterwards and played “pass the baby”. We belong to a really lovely congregation, who we will also miss once we move. Hopefully we will feel the same sense of homeliness at the UC in Mt Beauty.

After church we headed home for some yummy leftover pasta bake for lunch and some faffing around for a couple of hours. The weather was pretty nice in the morning, and we were hoping it would continue for the afternoon as we were going to…. the local footy match! I’ve been wanting to go to watch a local footy game since we got here, and the local derby was on so I begged and pleaded with Hubs to take me and he finally agreed. I was SO excited! We walked there around 1:30, paid our $6 each to get in, and took our “seats” on the hill (i.e. sat on the grass). 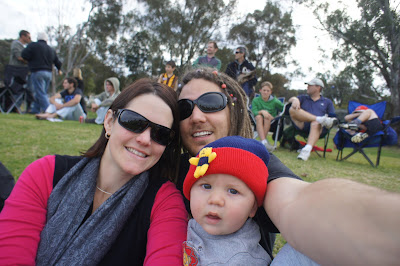 (That’s a yellow teddy bear on Chanbe’s new beanie, not a flower!) A couple of the guys Hubs studies with play for the Magpies, and a few of Hubs’ uni friends joined us later on to cheer them on. I just sat there soaking up the atmosphere. I don’t know what made me so giddy with excitement – maybe it was the fact that I felt like a local. That feeling of belonging to something/somewhere is obviously very important to me, and you could not wipe the smile of my face. 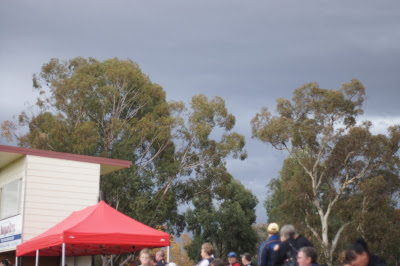 Not even these storm clouds rolling in could dampen my mood.

It was a very one-sided match with the Magpies dominating over the Rovers from the start. At the three-quarter mark, it really was starting to get dark and we contemplated leaving but thought we’d come this far, we might as well stay. Plus if we started walking home then, we’d probably get caught. Just as the teams ran on for the forth quarter, down came the rain. 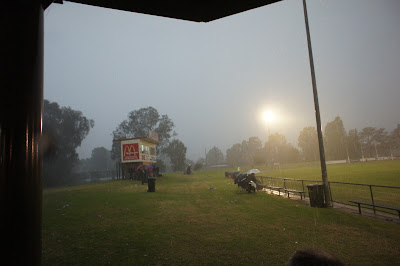 We had to admire these fans – they had obviously done this before!
Chance didn’t really see what all the fuss was about… 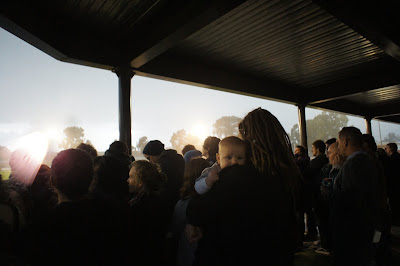 …and decided it was time for a nap! 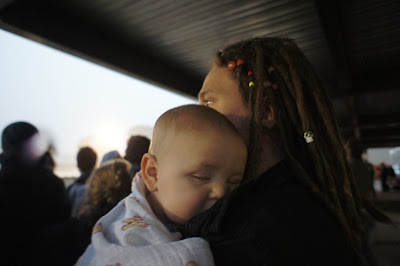 The rain just got heavier and the clouds darker, so once the full-time siren sounded, we graciously accepted a lift home with a friend. But even that couldn’t dampen my spirits! (No, I do not pardon the pun.) Particularly since Hubs loves wet, muddy football, so he was in quite a chipper mood as well. It was quite a spectacle in the end, and the Magpies ended up winning 117-55.
And last night just capped it off. We rugged up with some yummy beef stew and watched a bit of this (QI) and a bit of that (Hung). An absolutely bonza weekend (yes, I said bonza.) And I’m still on cloud 9 🙂 Not even Chance’s worst-night-sleep-in-weeks can bring this little chicken back down to earth! (Though I’m hoping and praying for a better night tonight!)