To say that Hubs loves scones would be an understatement. He loves scones. When our lovely neighbour made some the other week, Hubs devoured them and claimed they were the best scones he’d ever had. So when we had said lovely neighbour over for dinner last night, I asked what her recipe was.

She reminded me of Nanny when she told me she had to recipe. You just start with about 2 cups of self-raising flour, and add the right amount of butter, a couple of spoons of icing sugar, an egg, some very cold cream and chopped dates. Her tips were to just use a knife to stir (handling as little as possible) and use a very hot oven – about 240 degrees. Also, if it’s an electric oven, cook the scones on the bottom shelf, and if it’s gas, cook on the top.

Seeing as how I’d never made scones before, I thought I’d give it a go, as Hubs has his first exam this week and I wanted to do something extra nice for him.

I didn’t have dates so I substituted with craisins. That reminds me of one of our favourite moments in the TV show My Family, where Susan is cooking dinner (she is not known for her skills in the kitchen) and she says “I’m cooking Duck a l’orange. But I didn’t have any duck so I used mince. And I didn’t have any oranges so I used pears.” Ha ha ha ha ha!!!

Anyway. Back to the scones. This is how the mixture looked: 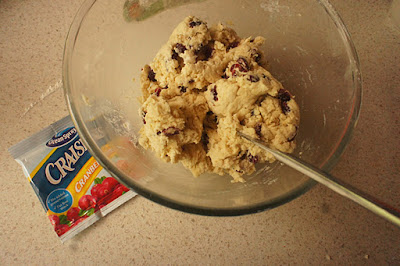 It wasn’t until I had put them on the tray that I realised I’d forgotten the egg. And the icing sugar. But I figured they looked pretty good, so I’d give them a go. What do you think? 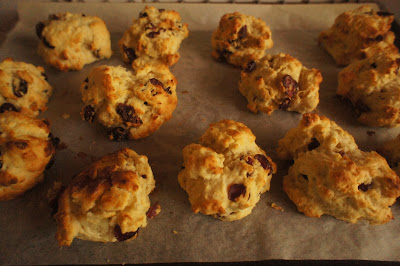 They were very very light and fluffy and quite delicious, even if I do say so myself! We had them straight out of the oven with a bit of butter and a cup of coffee, sitting on our deck. Chanbe even liked them!

As I was sitting there, enjoying our view, I thought to myself once again how lucky I have been to have had Hubs around so much in the last 12 months. A lot of people say to us how hard it must be with Hubs studying full time, and not having an income. And as much as it sucks not having money most of the time, having Hubs around to see Chanbe’s first year, and to give me sleep-ins and a cooked breakfast a few mornings a week, and to be able to have 3 meals a day together a lot of the time, and and and and… well it’s worth being broke for a while. Hubs has 1 more year of full-time study, and then it will be a totally different ball game. But I’m looking forward to the challenges that will bring.