Hubs and I love a good road trip. So when we decided to drive up to Brizzie for Christmas etc, I immediately got excited and started planning the route we would take. I have rellies in Griffith, NSW, that we have been wanting to visit since we moved south, so that was immediately going to be our first point of call. Then I asked my cousin who lives in Sydney if we could stay a night and she was most happy to have us. I just had to find somewhere between Sydney and Brisbane to spend the third night. Normally we would stay with my aunty Heather in Armidale but she has since moved back to Brisbane 🙁

I just happened to be at the baby shower of a girl Frith works with, talking to one of the locum’s wives and she asked what we were doing for Christmas. I told her about the road trip and she immediately said “Kempsey is about halfway between Sydney and Brisbane, you should come and stay with us.” I replied “Wow that’s really nice, thanks for the offer” to which she responded “It’s not really nice, it’s a genuine offer. It’s settled. You can stay with us.”

How could I refuse?

So on Wednesday the 7th of December, we began our journey. We had a lovely visit in Griffith with the fam and Chance had a lovely time being spoiled. We left the next morning for Sydney and were told to stop in at a place in Harden that sells good Devonshire Tea. We had over half a tank of gas (our car takes LPG) and even though we thought we should fuel up in Griffith before we left, it didn’t happen and we thought we’d just find somewhere on the way. Towns passed by and no one seemed to sell LPG. We thought Harden would have it as it seemed like a fairly big town, so with 80km left on the predicted range, we stopped for our Dev Tea.

And I promptly locked the keys in the car. We rang RACV (NRMA in NSW) and decided there was nothing else to do but enjoy our tea and scones. And Hubs enjoyed some soup. 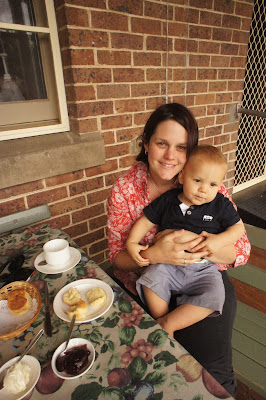 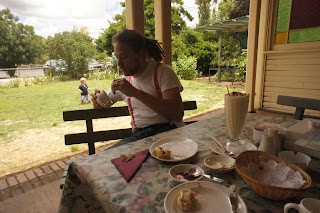 NRMA came and helped us out and advised us that the next LPG wasn’t til Yass – about 70km away. Or we could backtrack and get off the main highway about 30km back. We decided to live recklessly (and we knew we could get towed if we did run out of fuel!) and set off for Yass, praying like crazy.
With some excellent, fuel-efficient driving, and no air con, this is what the dashboard looked like when we got to the petrol station at Yass: 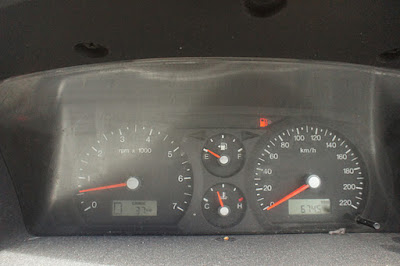 We fueled up on gas and cherries and set our sights for Sydney. And of course, in true Sydney fashion, the traffic started banking back about 60km out of the city. Thankfully we exited not long after and it was very easy finding our way to Nikki’s. My friend sent me a text to suggest Sydney peak hour traffic + crazy hour for kids = not much fun for Chanbe in the car. I took this photo: 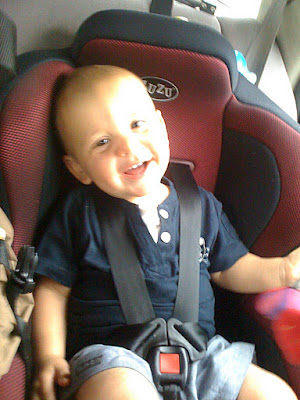 … and assured her he seemed okay! We had a lovely night in and although I was worried Chanbe wouldn’t sleep very well, being on a major, busy, noisy main road, he slept amazingly well, only waking up once. I joked that we should get a CD full of traffic sounds to help him sleep at home!

We left Nikki’s place at around 8:30am the next morning and took the one road all the way around the outskirts of Sydney and onto the Pacific Highway. Even though it took an hour, it was very easy, and when it comes to Sydney traffic, that is saying A LOT!

We stopped at Bulahdelah for delicious burgers and picked up a couple of $1 Hawaiin shirts (one was actually made in Hawaii!!) for Hubs, and then made our way to Kempsey arriving shortly after 3pm. We had a lovely afternoon playing on the lawn of our new friends’ house and also getting up close and personal with the local farmyard animals. 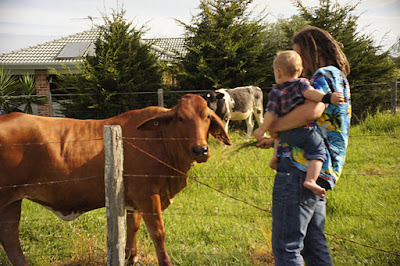 We all shared delicious home-made pizza for dinner and followed that with fresh fruit salad and a couple of games of Yahtzee – I won the first game and Hubs won the second. We had a bit of a rough night with Chanbe but I knew the end was in sight so I just kept my eye on the prize!

We left Kempsey around 9am and had to battle through roadworks, stopping and starting for a couple hundred kms. It was pretty frustrating but we managed. We stopped just outside of Grafton for lunch, then headed to Coolangatta to visit Hubs’ Dad and Nanna. After a cuppa and home made date loaf, we convinced a protesting Chanbe to get back in the carseat for the final leg.

We happily drove across the Houghton Highway in more rain and arrived at our new home not long after 6pm. 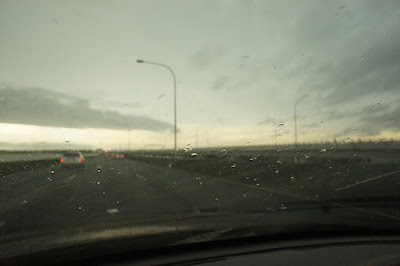 It was so good to get there. Mum and Dad made us a yummy dinner and that glass of wine I had hit the spot. We all slept soundly, awaiting the excitement of the birthday party to come!