The kids and I went on a road trip, just the 3 of us, up to Cairns a couple of weekends ago. Hubs had to work, and it was my friend’s son’s 3rd birthday, so I thought “why not!??” Chanbe is good in the car and Quinn is happy and content, well, all the time, so it wasn’t that daunting for me. We packed up and hit the road around lunch time on Friday. It’s about 340km to Cairns, which should take around 4 hours with a stop. The problem is, there are many stops. There’s so much roadworks going on between Townsville and Cardwell because of cyclone Yasi last year, that it adds a good hour to the trip.

I kind of knew this going in, and the kids were really amazing. Chanbe slept for about half an hour, but then we had to stop for the roadworks and he woke up, and that was it. We had lots of fun spotting all the diggers and trucks and dozers and tracktors etc etc. They kept him amused the whole trip! We stopped in Cardwell for a break and for me to feed Quinn, and the babysitter was there for Chanbe: 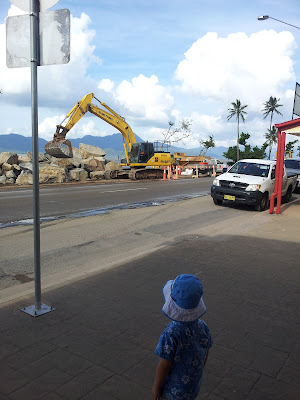 The digger was moving these huge rocks and it really was a site to see! And hear!! I had to convince Chanbe that we would see more diggers if he got back in the car, and boy did we ever! The second half of the trip was as great as the first, and after a never-ending stretch of traffic lights, we arrived at the White House. The boys had a play and went to bed with only minor objections, and Kate and I got to work on the cake. It turned out pretty well we think! 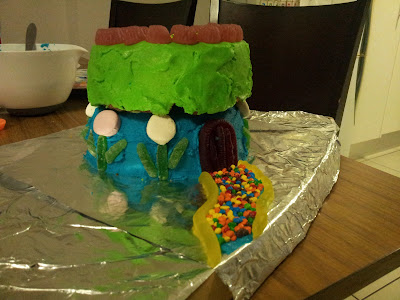 So, yeah, it’s supposed to be a mushroom house, but you get the idea! It was lots of fun! The kids had a great time and a great deal of sugar and thankfully had a rest/sleep in the afternoon before we headed out to Yorkie’s Knob. And no, I did not make that name up 🙂 That night the kids went to sleep quickly again, and Kate and I had some much-needed girly time with a  chic-flick.

On Sunday we headed out to Muddies which is a strip of playgrounds and water play areas along the Cairns Esplanade. Chanbe had a GREAT time playing in the water. 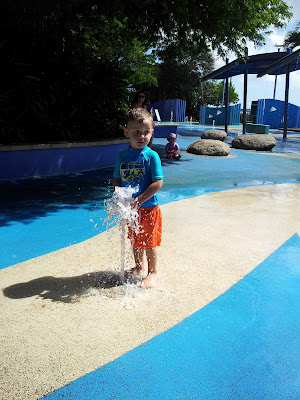 After that we headed to my rellies’ place for lunch and got on the road to head home around 2:30pm. Chanbe slept for about an hour, and woke up in Cardwell where I was going to stop, but decided to push through to Ingham. He was happy to chat away and point out all the diggers and big trucks again, and after a brief stop/play/feed in Ingham around 6pm, we got back on the road. The last hour wasn’t much fun, being dark, rainy and with lots of roadworks, but it was okay.

Then 10 minutes from home, Chanbe had had enough. He started crying and getting frustrated, so I started singing “Baa baa black sheep” to which he responded through tears “no no no baa baa black sheeeeeeeeep”. I thought to myself “you know what? You have been amazing this whole trip, and you have every right to have had enough.” I was honestly so proud of him and so pleased he had enjoyed the car trip for so long, and it was only that last 10 minutes in 10 hours that he was unhappy.

All in all, it was a fantastic trip and we will definitely be doing it again sometime soon!