After Quinn was born, I went through a pretty rough patch, trying to settle in to my new life. We had just moved, Hubs had just started full time work, Chanbe was taking some time adjusting, and I had some initial problems with breastfeeding. Life was just hard and I often felt waves of utter sadness and hopelessness. I was a little worried about post natal depression, so I just made sure I got help when I needed it.

Things got better after a few weeks, but every time I feed Quinn, the sadness comes back. Just under the surface; almost unnoticeable, but there. I never really thought much of it as it would pass almost as quickly as it came on.

So I did what any person in this day and age would do. I googled it. And it turns out I am experiencing Dysphoric Milk Ejection Reflex or D-MER. As the website states,

“D-MER has been linked to an inappropriate drop in dopamine that occurs whenever milk is released. In a mother with D-MER at the time of letdown dopamine falls inappropriately, causing negative feelings.”

I’ve read quite a bit about it and it’s very interesting, and nice to know that there is a reason for my fleeting sadness during feeds. It’s not really something I feel the need to have treated, but it sure is nice to have an answer!

Look at this face. You can understand why I was so confused that feeding my little girl makes me feel sad!!?? 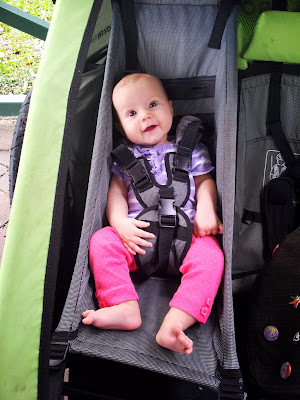