Skip to content
I’ve just spent 15 minutes scouring my blog for a photo of our lovely friends from Townsville and I couldn’t find a thing! I know I’ve taken lots of photos, intending to blog about them, and the only post I can find that I have mentioned them is this one! Maz and Hubs worked together and we met her and her husband and 2 year old son, Jarrah (now 3, far right) in the first week of Hubs’ internship. Maz was also very pregnant, due about a month after I was. We were immediately drawn to them for so many reasons. Basically, they were just awesome, and shared lots of the same ideas as us. (Does that make us awesome too? Welllll……) 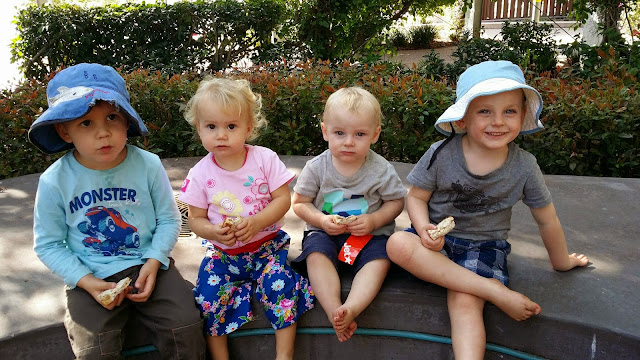 Anyway, they were in a very similar position as us in that they had no family and only a couple of friends in Townsville as they had moved from Perth so we found ourselves spending a lot of time together. Chanbe and Jarrah had a bit of a rocky relationship, with Chanbe asserting a bit too much dominance over his friend, but after a while, that calmed down a bit. And when Quindy and Alyx were born only a month apart, it was lovely to watch them grow together. Maz and I got along like old friends, and Haz and Hubs could spend hours talking about cars, BBQs and stuff bought at garage sales.
We really did have such a great time with them, and it was hard saying goodbye when we finally left for Mount Isa. They opened their house to us so many times, including for Chanbe’s 3rd birthday party, and when we were homeless for a couple of weeks between moves. We are very lucky to have met them and still keep in regular contact with them.
So when I found out that Maz and the kids were going to be in Brisbane the same time as us, we organised a catch up at Southbank. That’s where the above photo was taken. The 4 of them played so beautifully together, and it made us miss our time together even more! I’m so glad we had the opportunity to catch up, and we hope our paths keep crossing over the years to come.