Every year at Newman College, they hold a visual art competition. The theme of the competition this year was “Echoes” so Hubs did a photo composition. He spent some time practicing the execution of the photo, and then the final product took about half an hour to complete. (i.e. taking a number of different shots, changing the lighting, the positioning, the shutter speed etc.) Then on the way home from the pub one Friday night, Hubs stumbled upon some hard rubbish that the uni had discarded. There was a cabinet there with 2 glass doors intact, and Hubs decided that one of them would make a great photo frame!

Hubs had the photo enlarged to poster size and it looked amazing.

The prize of $500 is awarded at one of the fancy-pants dinners around this time of the year, so we got all dolled up (as usual) and attended. And then the winner got announced.

“And the winner is, Echoes of Them.”
And I went nuts, but Hubs had forgotten what he had titled it!
“By Hubs Hubsband.”
And then it sunk in. He was beside himself. He was in shock. And I had tears in my eyes. My goodness I was so damn proud of him.

There were 24 entries and his was chosen out of all of them, as being the best. And it was. Here’s the award-winning-photo with an award-winning photographer. 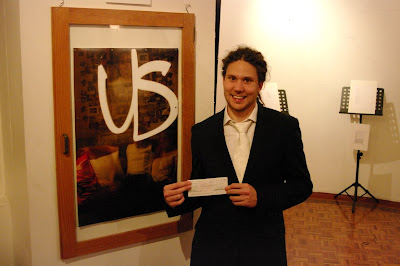 Now Hubs is trying to decided between a “new” camera lens or a “new” laptop.