Washington DC to New York City. 225 miles on a train.

As I mentioned, I thought our train left at 11am but when I got up at 8:40am I double-checked the ticket and it was for 10:20am. Oops. We (I) still had to pack everything!! So I babbled something to Hubs about making us peanut butter sandwiches and started throwing things in our bags. We got on a bus and thankfully there wasn’t much traffic, and we arrived at the station at 10am. Nice one! Jumped on the train no probs and even got a double seat that no one sat opposite us in. Score! I love travelling by train. It’s so relaxing and there’s so much to see! We went underground just outside of New York and didn’t resurface until we hit our hostel, so it really was amazing when we poked our heads out from underground!

Our hostel was not far from Central Park, so that was on our agenda for the afternoon after we’d checked in. It was everything I’d imagined, and more. 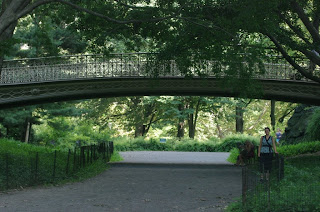 I have always wanted to go to New York. Don’t ask me why, it’s just one of those places that has always been a must-see for me. And it didn’t disappoint. Hubs wasn’t terribly keen on going to NY (actually, the whole trip was my idea and he just kind of went along with it, but within the first 4 days, he started a lot of his sentences with “On our next trip here, can we….” I KNEW he’d have a great time! Right, back to the story) but he was surprised at how much he liked it! Hooray!
We found this wonderful jazz trio and sat and listened for a while. The only thing missing was a glass of red wine. 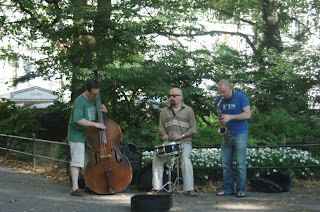 It was a beautiful warm day so we just did a lot of walking around and oohing and aaahing. I felt really relaxed and had a dozen New York songs running around in my head. (“I’m gonna beee a paaart of it!”)
We came across this guy selling balloons. Would you buy a balloon for your child from him?? 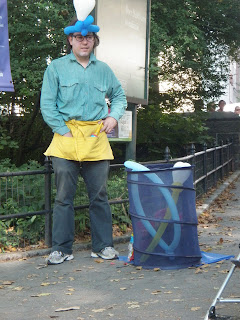 I don’t think so.
The park was just buzzing with life and entertainment. We came across these guys doing lots of silly tricks and fun stuff!
They finished off their show with this awesome flip! 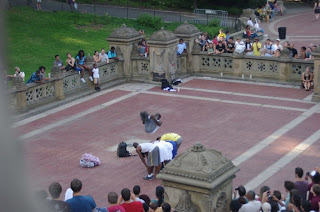 We were very happy to be in Central Park. 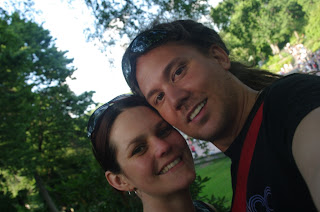 “Have you ever been to Central Park? Mister yes I’ve been there in my heaaaaaaaart.”

(Do yourself a favour and have a listen.) 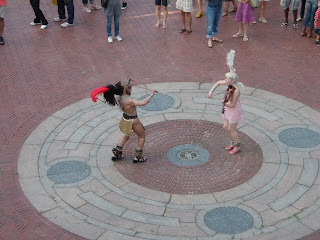 And beautiful sights to see 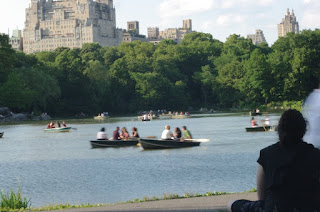 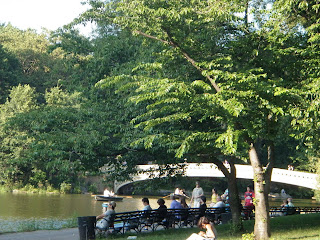 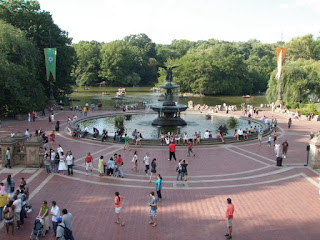 As I mentioned, it was a beautiful afternoon and EVERYone was out and about. 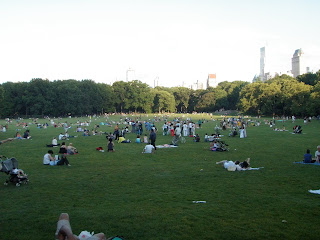 We headed towards town and found a quaint little restaurant and ordered a couple of beers and some dinner.(Hubs looks so tanned!!) 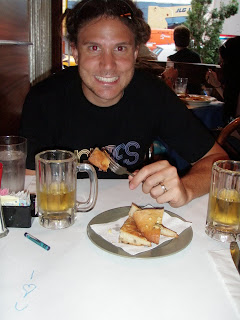 I had a crab cake and Hubs had the ostrich burger. After another couple of beers + tax + tips we had had a $50USD meal. Again, not the best value (we weren’t that full) but we WERE in New York after all. Oh and they had paper table cloths! So Hubs got busy drawing our dream home that we’re going to build one day. 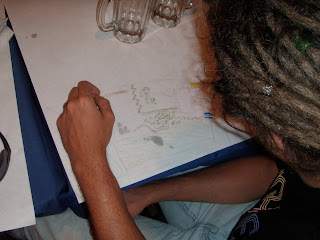 Afterwards we just headed back to the hostel to make some friends but there weren’t many people around so we just chilled out with whoever happened to pass through the common room. A great first day in New York City!