After a very restful night, a sleep in, bacon and eggs for brekky, and a read of the newspaper about the storm that had hit Melbourne the day before, we set off for Day 2. (I had actually received a couple of texts from friends late in the afternoon asking “are you okay??” and I was like “we’re just on a wine tour dude. We’re fine!” It wasn’t til we got to Sorrento that we heard about the storm and all the damage it did!!) Our first point of call was The Cups Estate, and what an absolute gem that was! We left the camera in the car so I don’t have any photos, but their fortified pinot was incredible. We HAD to buy a bottle (or 2!)

Next we headed towards Arthurs Seat, stopping at The Morning Sun Vinyard. This place was a bit ho-hum. The service wasn’t great and the most popular wines (the had a Pinot and Guwerzt) weren’t on tasting. So we left with a photo instead! 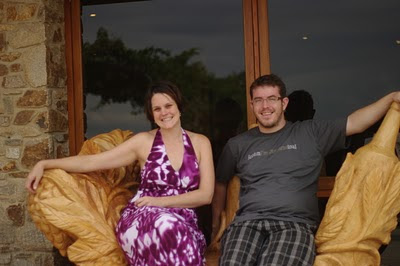 And then it was off to Vidoni Estate which had some rather nice wines. I think we picked a couple up there as well. Nathan was still looking for a good pinot, and it turns out the first one we’d tried at Hickinbotham had been the best by far! So we decided we had to swing by on the way home. But that was later on…

We then started to get a bit hungry so we were on the look out for some foooood. We stopped in at Myrtaceae (again, cos it was there) and they had some special wine tasting glasses: 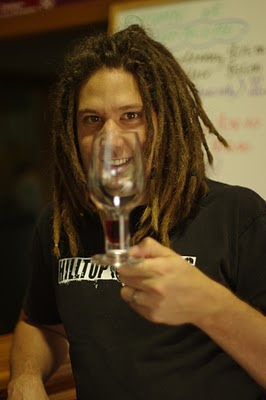 They only put in wine to fill the neck of the glass, and tell you to give it a smell, and you can’t smell much at all. Then, you roll the glass….. 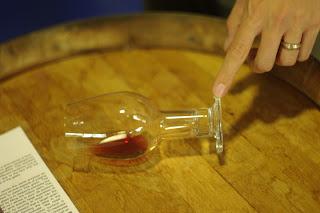 … give it another whiff, and the smells explode in your nostrils! Clearly, the same outcome can be achieved by just swishing the wine around the glass yourself, but the novelty was fun. And the wines were quite lovely! Still hungry though…

We checked our map and found a place that was recommended by another friend of ours, who used to be a winemaker in the Yarra Valley, so we made our way there. It was REALLY packed and when we asked for a seat in the restaurant, I had a look at the prices of the meals and just couldn’t do it. Meals were between $30-$40 each and wines were about $12 a glass. Nate had a look and said the only thing he’d be keen on was the duck, and the waitress had told us they’d run out of duck. I’m sure the food would have been amazing, but we just could NOT justify that sort of spending, so we made some excuse and excused ourselves, and just tried the wines instead. Which were lovely! (I can’t quite recall, but I think it was Dromana Estate.)

We were getting REALLY hungry at this stage, so we decided to pop in to a bakery and grabbed some pies. There was a duck pie on the menu so Nate settled on that, I grabbed a beef and burgundy and Hubs ordered a steak pie. Mine was really quite delicious and Hubs was raving about his. Nathan was a little disappointed though. As we were almost all finished, I had a bite of Hubs’ and told him that he got Nate’s pie as there was no WAY that was steak. Hee hee. Poor Nate didn’t get his duck after all.

We went to a couple more after this and ended at Darling Park Winery which was really sweet. It was getting late and we had to get back to Hickinbotham for the pinot so we started off home. We arrived around 6:30pm and realised how bad the previous night’s storm actually was. There was debris EVERYwhere. I’m kinda glad we weren’t around, but also a little disappointed we missed the action! Thankfull though, our roof didn’t leak, which it often does.

We headed out to watch Hurt Locker (it was the night of the Academy Awards and we had no idea of it’s success. We thought it was totally awesome) and then headed to Papa Gino’s (of course) for dinner and the Hickinbotham Pinot.

The verdict? One of the BEST wines I’ve ever had in my life. Seriously amazing. It actually didn’t taste much like a Pinot to me, but the flavours and smells hit me in the face like a Samboy Chip. I just couldn’t get enough (although I only had 1 glass) and really wish we’d bought a bottle! Oh well.

It capped off a great weekend of wine-tasting and shennanigans! Next stop? Wangaratta Wine and Jazz festival! Wanna come?