I remember when it all began. I was 15 years old and I wanted to dye my hair. Mum was a bit reluctant at first, but I convinced her that a Napro Live Colour, retailing at $4.00 at the time, was a semi-permanent, and might not even make a difference. I’m sure Mum then asked “well if it’s not going to make a difference, then why do it at all” and I’m sure I would have responded with “just becaaaaaauuuuusssse okaaaaaaaay?????” (my negotiation skills were a little light-on when I was 15.) I’m sure the real reason was that all my friends were doing it and I didn’t want to be left behind.

So permission was granted. I’m pretty sure I started with the chestnut colour which made my hair nice and shiny and glossy. And then I was hooked. The thing about Napro semi-permanent dyes, is that they’re actually quite permanent. (Aren’t they Ah-dele!?) I mean, the shine and gloss fades after a week or 2, but the colour certainly stays around. So I was hooked. I moved on to the reds and burgundy colours after that and ever since then, I’ve always had a colour in my hair. Mum actually let me experiment with foils at age 17 and I had some wicked stripes happening for my formal. I looked like a tiger! But mostly, I just went with the all-over-hair dye.

Once I turned 18, the freedom was so overwhelming that I moved on to permanent dyes! Woah! (I also got the top of my ear pierced, got a tattoo, and considered a belly button ring. Oh yeah. It was a big turning point in my life!!)

At 26, and during what I’m sure was a bit of a crisis point in my life, I decided I wanted to go blonde. I had found a hairdresser who worked from home who was happy to oblige (at a good rate too!) and suggested that since I had so much red dye in my hair, caked on over the years, that she would just put a whole lot of foils in. And I didn’t so much go blonde, but ginger. Well, kind of orange. The roots (that didn’t have any dye in them) were a lovely blonde, but the rest, well, not so much.

So I decided to start fresh. Wipe the slate clean. It’s been almost a year since I last dyed my hair. And since I’m pregnant, I also decided that I would wait til the bub is born before I embark on anymore dye jobs. So here’s what my hair looks like in it’s natural state:

(Thankfully you can’t see all the greys!!) And another one, in my natural colour, but waved for a 1920s-themed lunch we went to a few weeks ago: 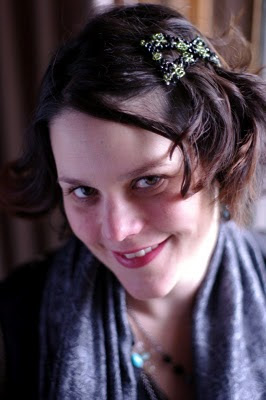 I’m not sure what I’m going to do once I dye again! How about I try blonde again?! Ha ha. Maybe not. Maybe some cute red tips or something. Am I getting to old for such things!?? NEVER!!