A rainy New York day. A few miles on foot.

Well, we planned it perfectly. The day we do all the outdoor sightseeing, it’s beautiful and sunny. The day we decide to go to the museums…. not so much… Perfecto! I had to take photos of the New York streets because they were just… so… NEW YORK! 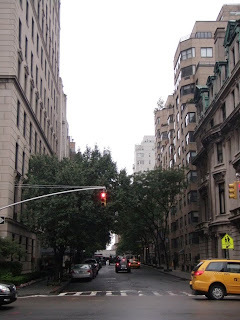 I wanted to go to the American Museum of Natural History, and Hubs was keen to check out The Met. We walked in the rain and when we arrived at MY museum, the most glorious sign was posted outside: 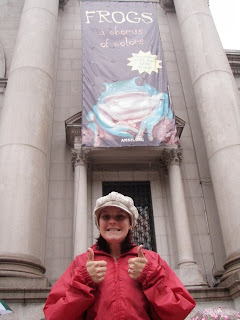 The exhibit was froggin’ awesome!! 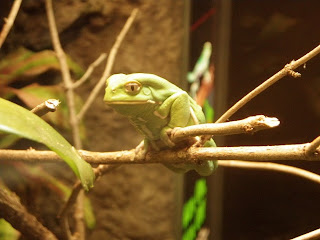 The whole museum was pretty outstanding. I took quite a few photos (even though I thought it was REALLY dodgy that you were allowed to!) but the frog exhibit was my favourite by far. I’m hoping to put all the photos together to make my own 2010 calendar!
I walked through Central Park to meet Hubs at the designated time and place and it was completely deserted. This was a little weird compared to the other days, but it was so peaceful and I got to see the park in a very tranquil state. 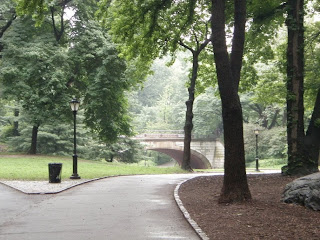 (one of the two. I can’t remember which!) on our way to the subway to get to Grand Central Station and boy was it pretty!
(shocking video sorry, but you get to see Hubs taking a photo or 2!! 🙂 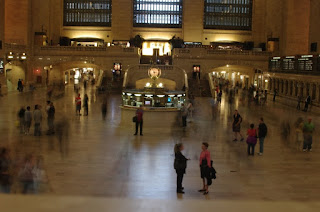 It really was very impressive and a nice way to spend some of our rainy day. We left in search of food and ended up at Wendy’s which was a bit like a heart-attack in a burger. Plus a bit of a rip-off – $15USD for 2 burgers and a shake. Hmmmm….
Now I wouldn’t say I was being obsessive about it (Hubs would), but I REALLY wanted to get an I(heart)NY t-shirt and I’d promised my friend Andrea I’d get one for her too. So I’d been looking since we’d arrived and they were selling boys shirts for something ridiculous like 4 for $10USD but I wanted a cut little female shirt which…. well…. let’s just say I got a teensy bit ripped off. But you know, when in Rome! And I LOVE my I(heart)NY shirt! Yay!
We were keen to get a portrait or caricature done but the weather was so bad that no one was out and about, so we decided to try again tomorrow before we took our flight to San Diego. We had to do some packing and a few other bits and pieces so we decided to leave the rain behind and head back to the hostel with a bottle of wine (or maybe 2).
Here’s Hubs helping me pack 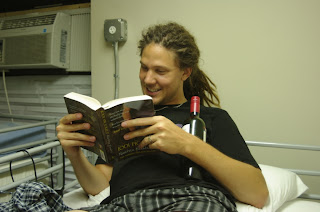 During our mammoth pack, a couple of German guys staying in our room came in and we had a little chat to them which was cool. We also introduced them to The Cat Empire and Hilltop Hoods and they seemed to like them both (or they were just being polite. Whatevs. (that was for YOU Hubs! Do you still have the teenagers on the line, wanting their lingo back?? HA!))
It was our last night in NYC and we really did have such a great time. It was also getting very close to the end of our trip so we were savouring every moment.