Thursday, 23rd July 2009.
Many miles on foot, walking around the San Diego ComicCon.

When I asked Hubs if he’d like to do a road trip across America, he wasn’t overly keen. It wasn’t on the top of his “to see” list, but he decided to broaden his horizons and agreed to the trip. So to get him excited, I asked if there was ANYthing in America he wanted to see. And he casually said that “I think the San Diego ComicCon is on over the summer.” So I looked it up straight away and it was the very first thing I booked. Hubs was happy. 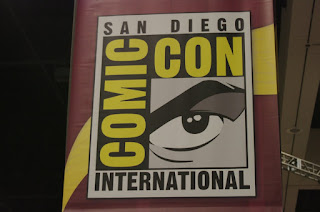 It was on the 2nd last day of our trip and it was something Hubs was looking forward to from Day 1. I was to be his wing-man and his stand-in-line person (the things we do for love!) but I ended up having a great time too! We got up at 6:45am (being a nerd is hard work!) and Charlene fed us a lovely brekky of breakfast pockets and fresh fruit. A great way to start the day! She then dropped us off at the trolley stop and we noticed a few people dressed in costumes so we figured we were going the right way. And then we just followed the crowd. It was madness!! We were told where to line up and this line was, I’m not kidding, about a mile long, but it twisted and turned so much – out to the car park and marina and around a building and all the way back again – and it was constantly moving, that we didn’t even realise! There didn’t seem to be an end to it but we were just chatting with a few people in line and started taking some photos of the crazy people fans.

Hubs’ first point of call, and the one stand he REALLY wanted to see, was Penny Arcade. PA is a webcomic that Hubs has been reading for years and years and he really wanted to meet Mike Krahulik and Jerry Holkins, and his dream was soon realised: 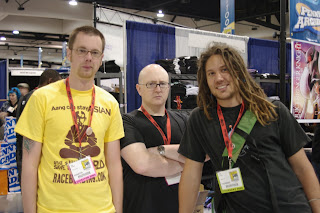 Hubs was very excited but played it cool and, as it was still early, he got to chat with them for a while. They tried to do an Australian accent (not so good) and drew a couple of sketches for hubs in his book, as well as signed his poster. They were really cool guys and a lot of fun to talk to. As we were walking away, Hubs turns to me and says.
“Honey, I don’t understand. I can cut bodies open with a scalpel, I don’t flinch at giving a guy stitches, but you put me in front of these 2 guys, and I get nervous. WHAT’S WITH THAT!!”
I assured him that he did very well at keeping his cool and after that, he was like “well, I’m done! We can go home now!” Ha ha ha. More dorky photos needed to be taken baby!!

Is it just me, or does Darth Vader look like he’s about to boot scoot? 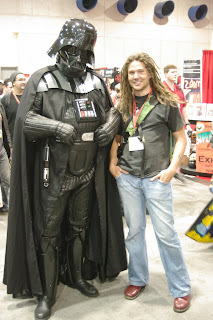 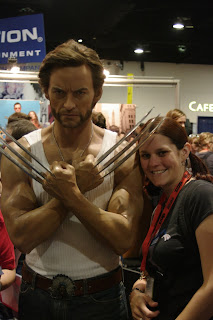 (This may or may not actually be Johnny Depp!!) 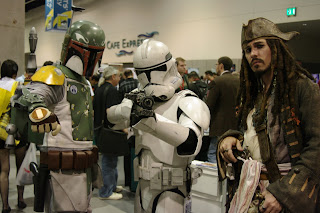 Hubs and Wifey at ComicCon 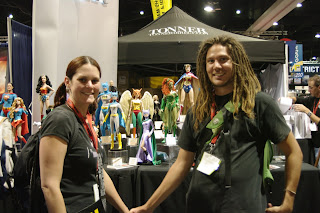 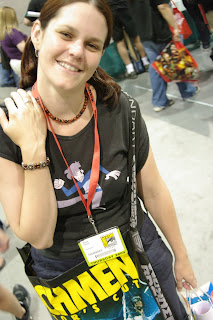 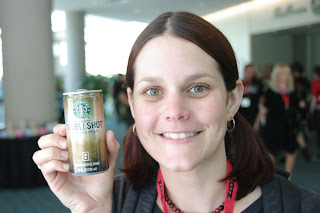 We popped back to see Mike and Jerry a bit later on and they had been talking about Hubs and how cool his dreads were and Mike had drawn a picture of Hubs!! How cooooooool! Hubs felt pretty special after that. 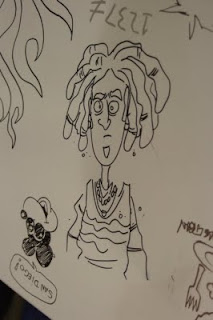 There was so much to see and do! 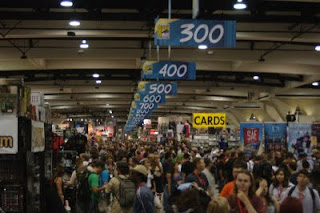 Even though it was crowded (about 20,000 people), it was all very well organised. We took heaps more photos but these were the highlights. We went to a few panel discussions as well which were cool. One of the guys who started TMNT was there and he was a good laugh. We also went to a panel with a writer (sorry, Hubs, forgot his name already) and he was really entertaining and informative too.
Anyway, it was kind of what I imagined it would be, but even better. Hubs had a fantastic time and it made the whole trip totally worth it! I’m so glad 🙂 We caught the trolley and Charlene picked us up at the other end, took us home, made us a G&T and served us dinner, and we went to bed exhausted. A great day!