Warning: photo is not for the faint at heart!

I put my neck out a week ago – this is the first time this has happened to me in a very long time. The constant pain that I used to feel hasn’t been a part of my life for the better part of 2 years which has been absolute bliss. I put last Wednesday’s episode down to the breastfeeding positions – constantly looking down and lots of bending over and lifting. So I spent Wednesday and Thursday sitting around hoping that Chance wouldn’t want too much attention from me. He was an absolute angel – happy to amuse himself for a lot of the day between his play mat and bouncer. I booked myself in with the local Chinese Medicine establishment for some acupuncture on the Friday. I normally prefer a GP to perform the acupuncture but couldn’t be bothered trying to find one in Wang. By Thursday evening I was feeling a bit better – either my neck was getting better or I was just getting used to it. I think I did a pretty good job of sucking it in actually.

I went to my appointment on Friday afternoon and the acupuncturist got started. I don’t know if many of you have had acupuncture, or believe in it’s ability to help, but I had my first lot of acupuncture when I was 10 years old (I injured my big toe) and have never looked back. I’ve used it for RSI in my wrists, for post-nasal-drip that I had for 18 months, for sciatica (this occurred after a sneezing attack) and for a back problem that I developed 10 days before our wedding. Each time I had great success. I like the traditional way of putting in the needles – just using two fingers to almost squeeze it in. These days, most acupuncturists use the tube. I hate the tube. This method involves the needle being put into a cylinder and being “tapped in”. This ensures the needle is inserted the correct depth. I can’t quite work out why I hate it so much but it makes me tense up and cringe every single time. I liken it to nails down a blackboard or papercuts between your fingers or kicking your little toe on the corner of the bed. It’s not relaxing in the least.

Anyway, back to the story. She put in about 12 needles and left me for 15 minutes, came to check on me, then left for another 15 or so minutes. When she returned and took the needles out, I thought that was the end of the treatment, but she asked if I’d mind her doing some cupping on my back. I really like cupping so I said sure!

I think she may have put the cups on a bit tight though. This was my back a few hours later: 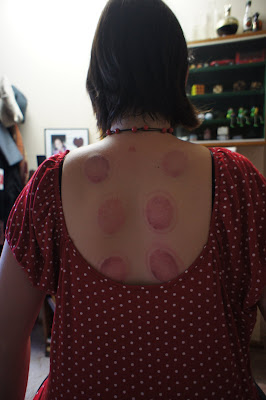 And the bruises are still there, albeit faded, a week later! I’m pretty sure it’s not supposed to hurt as much as it did (it never has before) but she wasn’t done yet! She finished it off with a white-knuckle inducing massage. Why didn’t I tell her to be a bit softer? Well, ummm, I don’t know. Maybe because she didn’t ask, or maybe because I’m a massive chicken. Plus the pain felt pretty good. The next day I was quite sore but by Sunday it was feeling much better. I’ve been putting heat on it since then and it’s definitely better.

She said I should have a follow-up appointment sometime this week. I’m thinking not…