Saturday morning my body clock woke me up at 6:30am (7:30am Victoria time) and no matter how hard I tried, I couldn’t fall asleep again. So at 7:30am I decided to stop trying and got up and leisurely got ready for my 9am doctor’s appointment. Being almost 37 weeks pregnant at the time, I had to get a letter from a doctor 24 hours before my flight, saying I was fit to fly. I decided to get there a bit early (8:35am) in the hope that I could get in a bit earlier, but didn’t end up going in til 9:05!! Oh well You win some you lose some. After stopping at the shops I headed home and woke Hubs up (lucky bugger) and had some yummy leftovers for brekky. We then started welcoming friends and family whom Mum and I had invited over for the morning. It turned out to be only about a dozen people who arrived and left at all different times so it was really nice to catch up with them.

During all of this, my gorgeous cousins agreed to do my hair for me for the wedding: 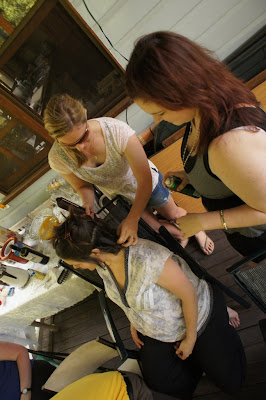 And, well, I don’t mean to brag, but as usual I think Hubs and I scrub up okay 🙂 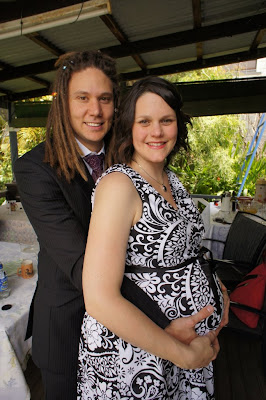 The wedding was absolutely wonderful, and, as I suspected, I needed the waterproof mascara and extra tissues. The service was very traditional and similar to ours, so it was lovely to re-live the vows Hubs and I exchanged in the same place a few years ago. Jess, the bride, looked absolutely stunning, and Matt, the groom, was wearing the biggest, widest grin you could imagine. It was a very personal service that really suited them both and I’m so glad Hubs and I could be there to share it with them.

After the ceremony, we had over 3 hours to kill so we decided on the spur of the moment to head out to our friend’s place in Zilmere (about half an hour north of the CBD), as he was having his 30th birthday party. We turned up as a surprise and it was really nice catching up with them. The party hadn’t officially started so we had them mostly to ourselves for a little while.

We then headed back in to town for the reception and were delighted at the table we had been seated at – we met some lovely new people and shared good conversation accompanied by good food and (just a little) good wine. Matt & Jess had hired the same DJ that we had at our wedding, (from our recommendation) so we said hi to him and he remembered us which was really nice. They even played our wedding song during dinner (more tears) which was lovely.

Then it was time for us to hit the dance floor, and, as I already mentioned, we hit it HARD! Hubs was in fine form, pulling out The Robot and a good AC/DC head-bang. I couldn’t pull out my usual moves with my extra cargo, but still had my moments! Alas, all good weddings must come to an end, so at 11:45pm the bride and groom bid us adieu and we headed to the car. As we took off, Hubs looked at me, and I looked at him and we knew what each other was thinking. (Don’t be rude.) Our friends were having a Halloween Party out at Arana Hills (about 15 min from CBD) that night, so we gave them a call to see if they were still kicking on. And sure enough, they were!! So we headed out there and caught up with 4 really good friends of ours (including 2 of Hubs’ groomsmen!)

I truly don’t know where all the energy was coming from but it just didn’t stop! At 2am though, it was time to head home and I was pretty happy to crash into bed at 2:30. A full 20 hours of being awake, and one of the best/most fun/memorable days EVER! I begrudgingly set the alarm for 8am the “next morning” and drifted off into a deeeeeep sleeeeeeep…