At 8am the alarm sounded and up we got. Well, up I got. Hubs had a little extra sleep while I showered and started getting ready. We had my Dad’s famous scrambled eggs with the works (speck, mushrooms, parsley, cheese, onion… anything else, Dad???) and some lovely strong coffee to start our day. We then packed madly (as is always the way!) and headed over to Hubs’ Mum’s place to say goodbye. Our flight left on time (10:50am) and arrived in Avalon just after 2pm Melbourne time (daylight savings is a bitch coming home!) As we were making our descent into Avalon, the pilot informed us that it was cloudy and 15 degrees. Wha?…. We just spent 3 days in 25 degree sunshine! Don’t do this to us!!

As we stepped off the plane, we knew we were home. It was cold and windy and gross 🙂 We jumped in the kombi and began the hour-long journey back in to town. I knew my cousin was down in Melbourne for the races, so I thought I’d see if she was free for a coffee, and luckily for us she was. We met her in town and had some great quality time with her which was just such a bonus. 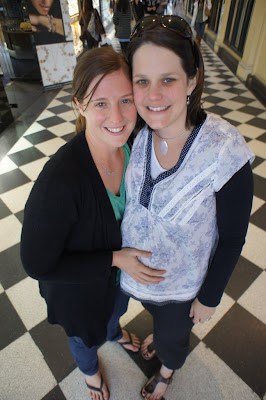 We were talking about arranging to go out to dinner with some other friends, but when I rang our friends who we were staying with (same people as Thursday night) and they mentioned they were cooking a lamb roast, our minds were made up. But we still hadn’t hit the wall! We had a lovely evening with them and slept very well that night.

We didn’t set the alarm for the next morning but the trams woke us up at a very respectable 9am. We had a lovely breakfast with Liza and the boys and plotted our journey for the day – we’ve been looking for centre seats for the kombi for a few months now and Hubs had phoned a couple of wreckers on the (deep) south side of town so we left around 10:45am to go and check them out and hope for the best! It took AGES – we arrived after midday! I think we only went about 35km but that takes a long time in Melbourne traffic. As we drove into the wreckers, another gentleman pulled up and he got chatting to Hubs. He asked what we were looking for, for the kombi and when Hubs said centre seats, he said that we probably wouldn’t find any at the wreckers as he is there every week and hadn’t seen any. BUT he had some at his place which was just around the corner. He gave us his address and we parted ways.

I thought it was a bit weird but Hubs wasn’t the least bit suspicious. Of course we didn’t find any in the wrecking yard (didn’t even find any kombis, even though we were told there were 1 or 2 in the yard!!). We thought, since we had come all this way, we would take a gamble and check out this guy’s offer. And sure enough, he had exactly what we were looking for, in the right condition at the right price.

What are the odds of this chance meeting? Seriously! 5 minutes either way and this wouldn’t have happened. This was definitely a God moment. We then popped in to say hi to Hubs’ aunt and cousin on our way home and were back on the Hume highway around 4:30pm. On our way home we arranged for some friends who were up in Wang from Melbourne for the races the next day, to come on over around 8pm for dessert. We just couldn’t help ourselves!! We arrived home and Hubs went to pick them up as I made some delish blueberry pancakes and we had a lovely evening with them.

And if you think that was the end of our mammoth weekend, you’re wrong. We still had 1 more day to go…