I’ve started writing this post half a dozen times and it never seems quite right, so I’m just going to dive in and see what eventuates. In case you missed the news, I gave birth to a little baby boy, Chance Harry, 10 days ago, and ever since then, I’ve just been living in cliche world. I don’t know why, but I thought I’d be the exception to many of the “rules” of parenting in the early days. But no. I’m just like everyone else. Let me give you some examples of the thoughts and feelings that have been going on inside my head:

– I’ve used the term “they don’t call it labour for nothing you know” more than once. So cliche.

– I was told on day one to expect the “three day blues” on day three and, still being pumped up on adrenaline and hormones, I was all like “naaaaah, that won’t happen to me! Look at me! I’m fine! I love being a Mum. How could I possibly get the blues??” Almost to the hour, the three day blues struck me down and I’ve been crying on and off every couple of days since. Fun! And so cliche.

– For the first 2 days after we got home, I had to check on Chance every 2 minutes. My friend sent me an email (you know who you are) saying he bets that’s what I’d be doing and he was right. Dammit!!! And how did he know? Cos that’s what every new parent does. So cliche.

– I think I have the cutest, most beautiful baby in the world and I can lose an hour just watching him sleep. So cliche.

– The house looks like a bomb hit it. I don’t know why, but I thought I’d avoid a lot of the chaos of bringing a new baby home. Gosh I was really and truly kidding myself on that one. So cliche.

– I’m convinced that Chance smiles at us and that he’s not simply passing wind. So cliche.

So there you have it. I finally understand what parents mean when they say “it’s different when it’s your own kid.” I used to feel sorry for mums who had to duck out to change their baby’s nappy or breastfeed or console their crying baby, but now I get it. It’s not a chore – it’s an absolute honour. Now I get it – your priorities do change. Now I get it – Hubs and I are just loving being parents and everything that comes with it. I know it’s early days, and we have already had a couple of really rough nights, but all I need to do is look into our baby’s eyes and know how blessed we are, and know that no matter what, everything will be okay cos we are a part of an amazing family.

So cliche. And loving it. 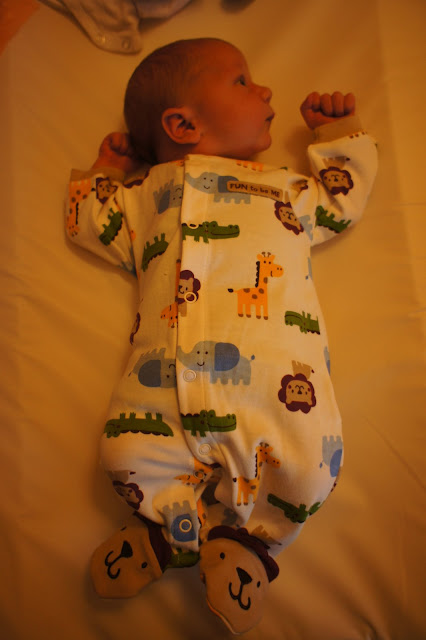