Oh the joys of the playground visit. I mean don’t you just love it? I always thought that as a parent I would love taking my kids to playgrounds. It’s like free babysitting, right?

It turns out that the humble playground can, as well as bringing out the best in my children, bring out the worst in them. And in me. The constant requests of “can you push me on the swing?” The complaints of sand in eyes. The tantrums and disagreements with other people’s kids. The repeated asking for snacks and water. The judgement from other mums if I check my phone for too long. The panic I feel when I look up to do a head count and can’t find Darby. (In fairness, if the playground isn’t gated I don’t let him out of my sight.)

Also in fairness, this kind of trip to the playground doesn’t happen too often. Mostly my kids have a good time and can amuse themselves for up to two hours. They make friends with other kids there and have a great time.

We discovered a new playground today that had some of my favourite features: It was fully fenced; it was nowhere near a road,  it had a bench seat inside the fence, there were public toilets (though by some miracle we didn’t have to visit them even once!); it was very quiet and had all the favourite pieces of equipment; it was very shady. We were there for nearly two hours and the kids had a blast. 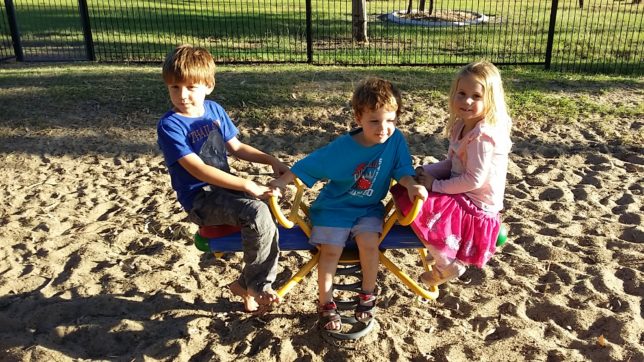 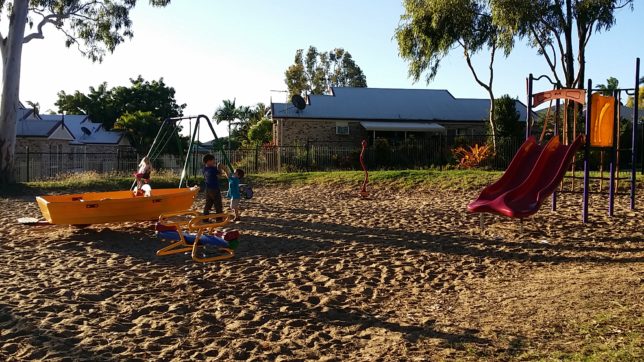 There were a few other kids here at various stages but we had the place to ourselves for the final half hour. Thankfully it was a very successful playground trip. We’ll be coming back to this one for sure!